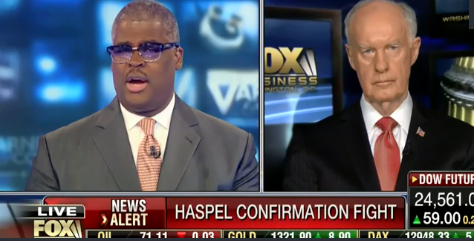 A rather stunning comment was made by a guest on Fox Business Network this morning, and FBN host Charles Payne has since apologized.

My Apology to Senator McCain and his Family
“This morning on a show I was hosting, a guest made a very false and derogatory remark about Senator John McCain. At the time, I had the control room in my ear telling me to wrap the segment, and did not hear the comment.

I regret I did not catch this remark, as it should have been challenged. As a proud military veteran and son of a Vietnam Vet these words neither reflect my or the network’s feelings about Senator McCain, or his remarkable service and sacrifice to this country.”
Charles V. Payne

It’s very simple to me, Charles. If we have some terrorists and the possibility of five nuclear weapons going off in U.S. cities, I want to use any method that will determine where they are, when it’s going to happen and how we can nullify them. I’m not interested in values. I’m interested in saving a million American lives. It is very simple. And that kabuki that went on yesterday on the Senate intel committee by the Democratic members…it ought to ensure all our viewers — never elect a Democrat again.

He later said, “Sen. John McCain said he’s not going to endorse Haspel also in part because she believes in torture, that she thinks it works, even though she laid out at least three instances where it did work to the benefit of humankind, not just Americans, but all human beings,” McInerney told Payne live.

Payne then asked McInerney how Congress should evaluate Trump’s nominee.

“Well, she can’t use it [torture] anymore because we have determined in Congress that it’s not legal. The fact is, is John McCain, it worked on John. That’s why they call him ‘Songbird John,'” said McInerney.
< Previous Article
Next Article >
Advertisement
Advertisement
Get TVNewser delivered straight to your inbox
Advertisement