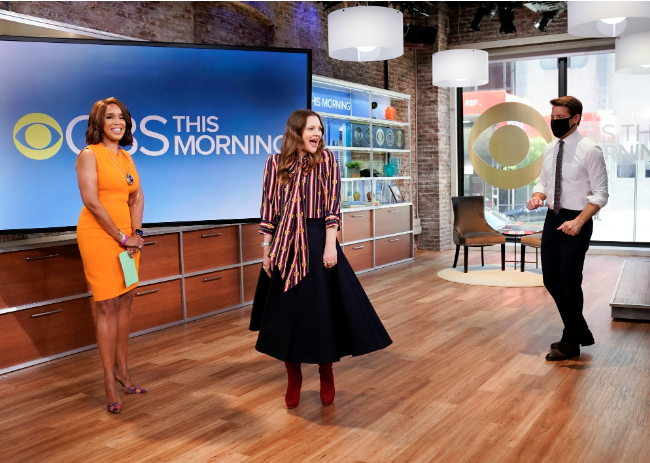 CBS This Morning co-host Tony Dokoupil is going on parental leave, and instead of having another CBS Newser take his place, the morning show has decided to use rotating celebrity co-hosts in the 8 a.m. ET hour.

The broadcast will use CBS News correspondents during the hard news 7 a.m. hour, however. For the week of May 17th, that means Vlad Duthiers, and the following week, 60 Minutes+ correspondent Enrique Acevedo, who anchored for years at Univision before coming to ViacomCBS.

In her memo to staff, CTM executive producer Shawna Thomas said the show is going to be “trying something new” by using well-known TV personalities from outside of the news division to fill in for Dokoupil, whose wife, MSNBC anchor Katy Tur, is expecting the couple’s second child later this month.

“Because it’s hard to fill Tony’s stylish, yet affordable, shoes, we are inviting many different people to split up hosting duties for the first two weeks of his parental leave,” Thomas writes.

Drew Barrymore (whose syndicated daytime talk show airs on CBS TV Stations) and LeVar Burton, of Star Trek, Roots, and Reading Rainbow fame, will take turns guest-hosting CBS This Morning’s second hour during the week of May 17. Barrymore will host May 17 and 18, while Burton will join Gayle King and Anthony Mason on May 19 and 20.

The Late Show with Stephen Colbert bandleader Jon Batiste and model Ashley Graham will take turns guest-hosting 8 a.m. during the week of May 24, and CBS Sports analyst Nate Burleson will return for the show’s What to Watch segment next week.

The L.A. Times was first to report this news.

Below is the memo from Thomas, obtained by TVNewser:

As we look forward to AS MANY BABY PICTURES AS POSSIBLE from the Dokoupil-Tur family, I wanted us to have a little fun with the show in Tony’s absence.  Because it’s hard to fill Tony’s stylish, yet affordable, shoes, we are inviting many different people to split up hosting duties for the first two weeks of his parental leave.

We’ll use CBS News correspondents for the first hour of the show. For the second hour, we’ve booked some familiar names, some from inside the ViacomCBS family and some outside, to sit at the table.

For the week of May 17th, our esteemed Vlad Duthiers will handle the 7a hour co-hosting with Gayle and Anthony. The following week, 60 Minutes+ correspondent Enrique Acevedo, who anchored for years at Univision, will handle the 7a hour. We’ll also feature Enrique’s reporting on the Republican Mayor of Miami and how he’s trying to change the perception of the city.

For the 8am, we’ll be trying something new. On May 17th and 18th, you’ll see Drew Barrymore of the Drew Barrymore Show (check your local listings),  take a seat at the table for the full 8a hour. LeVar Burton, of “Roots”, “Reading Rainbow” and “Star Trek” fame, will join us at the table on Wednesday and Thursday of that week, the 19th and 20th.  (Hopefully this will be the little boost he needs to get that Jeopardy! job permanently. #TeamLeVar)

As for the week of May 24th, In the 8a hour, we will divide the week between model Ashley Graham and friend-of-show and “A Late Show’s” bandleader and music director Jon Batiste. Coming off his Oscar win, we’ll see if Mr. Batiste likes this job better than his amazing gig on Colbert.

And Nate Burleson of CBS Sports and the NFL Network, who gave us a little energy boost on the show today, will be back to handle What to Watch duty next week.

The booking team has been incredible as we’ve tried to put this together, so thank you to them. Keep an eye out next week for the Candace Kuo-driven Spring into Summer series.  Think of it as our guide to how to get ready for this semi-normal summer as more and more people are getting vaccinated.

Also, Gayle, Drew and Tony had some fun in the studio after the show yesterday. The social team will give us a heads up when stuff is posted so everyone can share.

Most importantly, congratulations to Tony on the soon-to-be-cuddled new edition to his family.