NEXT:U.S. TV Networks All-In for Wedding of Prince Harry and His American Bride
PREVIOUS:29.2 Million U.S. Viewers Tuned Into 2018 Royal Wedding, and NBC Was No. 1 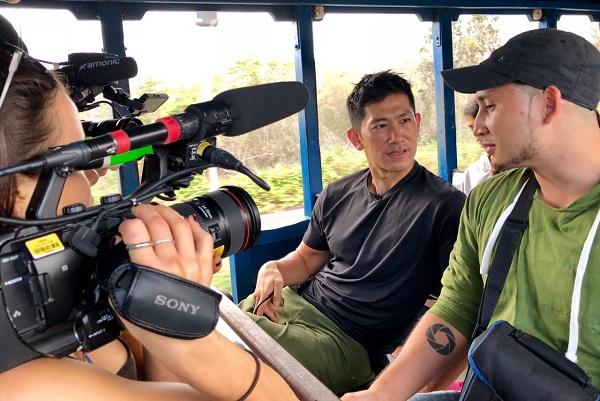 When one turns on the news these days, it seems like all politics all the time. That’s not true for CBSN.

CBS News’s 24/7 ad-supported streaming service is airing its 20th CBSN Originals documentary tonight at 8 p.m. Titled Adapt or Die, it’s a climate change-focused documentary hosted by CBSN correspondent Adam Yamaguchi. For Adapt or Die, Yamaguchi traveled to the Galapagos Islands to examine what seems to be an uncertain future for many animals’ ability to adapt and evolve.

We caught up with Yamaguchi and CBS News Digital senior executive producer Nancy Lane to learn more about CBSN Originals, reporting for a streaming news service and how CBSN has evolved since its 2014 launch.

TVNewser: Adam, what can viewers expect from Adapt or Die on Sunday?

Yamaguchi: Viewers will be immersed in a magical, inspiring natural wonderland full of unique wildlife. The Galapagos Islands is one of those places that forces you to think. You can’t help but think about the adaptations and evolutionary mechanisms that created the animals we know and love today. This documentary presents both a sense of urgency for the many animals that will be outrun by climate change, as well as a sense that the raw genius of nature will ensure that the strong will figure out how to live another day.

TVNewser: You hosted a docu series on Current TV for a while. How is reporting and producing for streaming TV different from doing so for linear?

Yamaguchi: We apply the same journalistic rigors to our reporting irrespective of the different formats and platforms. Digital gives us the flexibility to allow our stories to be as short, or as long, as they need to be. It provides incredible creative freedom.

TVNewser: Nancy, how has CBSN evolved since the 2014 launch?

Lane: CBSN has developed a strong, distinctive voice since launch, and we’ve achieved that through our original reporting. We have loyal users who come to us each and every day and by listening to real-time audience feedback, we’ve been able to develop content that we know will resonate. With an average age of 38, our audience cares about issues such as social justice, climate change and privacy and we’ve been able to tackle these topics with depth and perspective through our CBSN Originals series.

TVNewser: In addition to the live, anchored morning news, you have the long-form documentary features—20 as of Sunday; you had CBSN On Assignment last summer; the nightly political program Red & Blue. You rebroadcast the Evening News at 10 p.m. ET. Are you satisfied with your lineup as it stands? Which of these programs are most successful for you?

Lane: We’re more than just satisfied with our slate of programming—we’re incredibly proud. There’s no doubt that live continues to be a top priority—our users count on us to deliver the latest news as it breaks. However, we’re aware that our audience sees the world in both big interconnected ways as well as small locally focused ways, so we deliver both through substantive reporting beyond just news of day.

TVNewser: Have you received any feedback from Les Moonves about the service? Does he watch? What does he tell you?

Lane: Across all levels of CBS, executives and employees tell us CBSN is their source of news throughout the day. It’s been wonderful to have tremendous support across the company.

TVNewser: Did the CBS Sports HQ team reach out to you for advice before their launch? If so, what did you tell them?

Lane: Our team worked closely with the CBS Sports HQ team ahead of their launch to share insights on everything from product and engineering to editorial and social. We continue to collaborate with their team in addition to CBS All Access and all divisions of CBS Interactive.