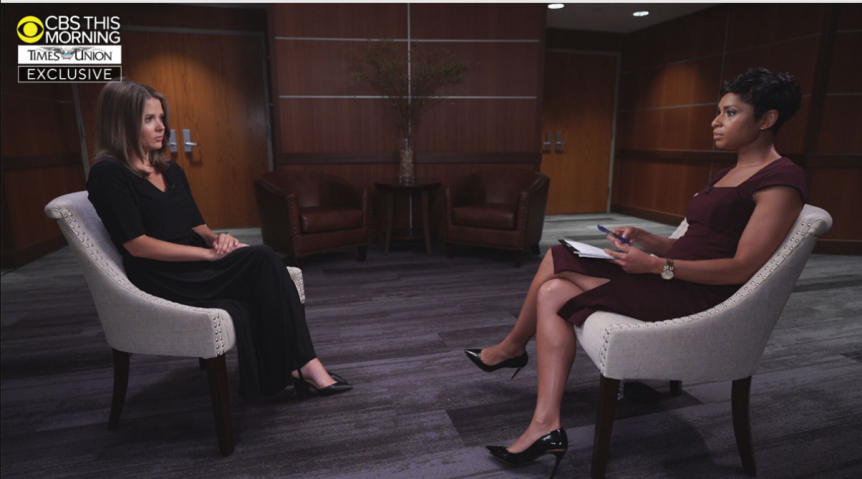 CBS This Morning and the Albany, N.Y.-based Times Union released the extended exclusive interview with Brittany Commisso, who was previously identified as executive assistant No. 1 in the New York state attorney general Tish James‘ report concerning the sexual harassment allegations being made against New York Gov. Andrew Cuomo.

Commisso began working as an executive assistant in the governor’s office in 2017. Now, she is speaking publicly for the first time since filing a criminal complaint with the Albany County sheriff’s office against Cuomo last week. Commisso is one of the 11 women who have accused Gov. Cuomo of sexual harassment and he continues to deny the allegations. Commisso tells CBS News correspondent Jericka Duncan and the Times Union that Gov. Cuomo is lying and that his groping was “not normal, it was not welcome and it was certainly not consensual.”

The extended interview aired on CBS This Morning Monday.

Britanny Commisso: So he gets up and he goes to give me a hug. And I could tell immediately when he hugged me, it was a probably the most sexually aggressive manner than any of the other hugs that he had given me. It was then that I said, you know, Governor, you know, you’re—my words were “you’re going to get us in trouble.” And I thought to myself, that probably wasn’t the best thing to say. But at that time, I was so afraid that one of the mansion staff that they were going to come up and see this and think, “Oh, you know, is that what she comes here for?” And that’s not what I came there for. And that’s not who I am. And I was terrified of that. And when I said that, he walked over, shut the door so hard to the point where I thought for sure, someone downstairs must think if they heard that “what is going on?” He came back to me and that’s when he put his hand up my blouse and cupped my breast over my bra. I exactly remember looking down, seeing his hand, which is a large hand, thinking to myself, “Oh, my God. This is happening.” It happened so quick, he didn’t say anything. When I stopped it, he just pulled away and walked away.

Jericka Duncan: I want to read to you what the governor said. Quote, “To touch a woman’s breasts, who I hardly know in the mansion with 10 staff around, with my family in the mansion to say, I don’t care who sees us, I would have to lose my mind to do such a thing.”

Commisso: Reading that is disgusting. It’s simple. I know the truth. He knows the truth. I know what happened and so does he.

He was to my left. I was on the right. With my right hand, I took the selfie. I then felt while taking the selfie, his hand go down my back onto my butt, and he started rubbing it. Not sliding it. Not, you know, quickly brushing over it—rubbing my butt.

I was afraid that if I had come forward, and revealed my name, that the governor and his ‘enablers’ I like to call them would viciously attack me, would smear my name as I had seen and heard them do before to people.

Maybe to him, he thought this was normal. But to me and the other women that he did this to, well, it was not normal. It was not welcomed. And it was certainly not consensual.

Below, the segment which aired on CBS This Morning Monday. For the extended version of the interview, click here.

In an exclusive interview with @CBSThisMorning & @timesunion, Brittany Commisso, an Executive Assistant at NY Gov. Cuomo’s office says he groped and sexually harassed her — allegations he denies.

“The governor needs to be held accountable… What he did to me was a crime.” pic.twitter.com/uPuZiuEKq9