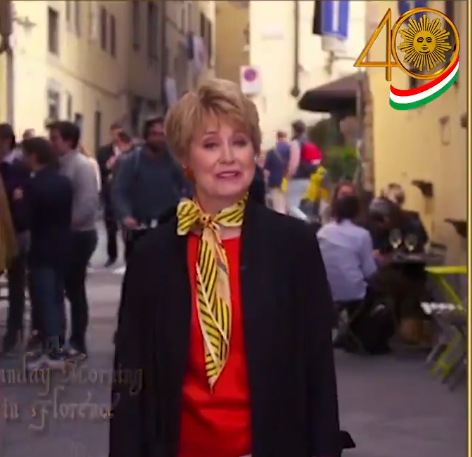 The Italian-themed season finale was anchored by Pauley, who took the reins from Charles Osgood in October 2016, and featured a report from Mark Phillips on the increasing number of Americans with Italian roots who are becoming citizens and moving there.

Pauley traveled to the Santa Maria Novella Pharmacy, believed to be the oldest apothecary in the world. She also looked at the history of the region, including visits to Michelangelo’s masterpiece, David, and one of the world’s great museums, the Uffizi Gallery. She also talked with Clet, an artist who plasters street signs with stickers.

Alino Cho caught up with music superstar Sting and his wife, Trudie Styler, at their Italian villa.

Lee Cowan reported on the true tale of Pinocchio. Rita Braver talked with author Frances Mayes, writer of the bestselling book Under the Tuscan Sun.

Martha Teichner explored the works still made by hand by artisans in Florence.

Tracy Smith visited the small town in Italy that was saved when fashion designer Brunello Cucinelli decided to move his company’s headquarters and manufacturing plant to the rural location.