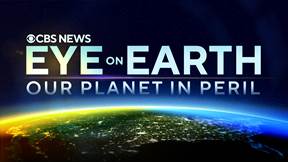 CBS is throwing the full weight of its news division behind the topic of climate change with the launch of its new initiative “Eye on Earth: Our Planet in Peril” ahead of Earth Day.

The division-wide initiative debuts on Monday and will be featured on all CBS News broadcasts and platforms, CBS Television Stations and CBS News Digital.

The program examines all aspects of climate change and efforts to heal the planet, featuring original reporting from around the world. CBS News senior national and environmental correspondent Ben Tracy, CBS News senior foreign correspondent Mark Phillips, CBS News foreign correspondent Debora Patta and meteorologist and CBS News climate specialist Jeff Berardelli are set to lead the coverage, joined by CBS News journalists focusing on how ordinary people can help the world become cleaner through small changes in their daily activities. The series will also explore the larger economic factors that impact climate change in both a negative and positive way.

“Climate change affects everyone, especially future generations. It’s not only a worry for scientists and environmentalists but is something all of us as humans should be thinking about everyday,” Al Ortiz, CBS News vp of standards and practices, said in a statement. “That perspective has shaped our ongoing reporting on climate change for years and is informing how we can capitalize on Earth Day as a moment to objectively report on these challenges. We hope to provide the audience with specific solutions and illuminate potential opportunities to help make our world better.”

Programming also includes coverage on climate change on CBS This Morning leading up to Earth Day on April 22, and on Thursday the entire 8 a.m. hour will be dedicated to Earth Day.

CBS Evening News will also be diving into reports on the impacts of climate change and efforts to protect the environment, such as Mireya Villarreal looking at a shift to solar and wind industries in Texas and transitioning oil rig workers to a green economy and Manuel Bojorquez reporting on two fisherman’s efforts to clean up the waterways around Florida.

The initiative will extend to the April 25 edition of 60 Minutes+, which streams on Paramount+. Correspondent Wesley Lowery will report from Jackson, Mississippi, about the city’s infrastructure, which failed during a recent icy blast that left some residents without water for nearly a month.

The CBS Television Stations Group also plans to highlight local stories throughout the week on how climate change is affecting their communities.