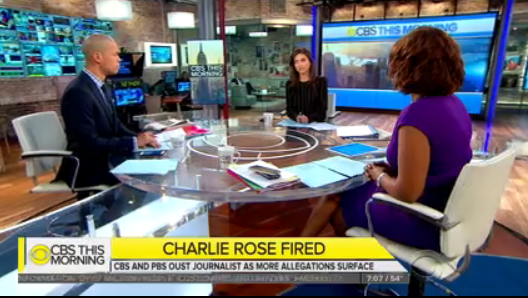 CBS News is reporting on new sexual harassment accusations against Charlie Rose. The reporting shows Rose’s behavior was not limited to his time at his PBS show in the 1990s, but continued at CBS News when he joined CBS This Morning in 2011.

“We learned about these cases not from the HR department but through our own investigation,” Golodryga said in the report. She later noted that “a source with knowledge of Charlie Rose’s firing” said CBS News did not know the specifics in Monday’s Washington Post report until earlier that day.

Rose has not responded to requests for comment from CBS News, but the CBS News communications office did: 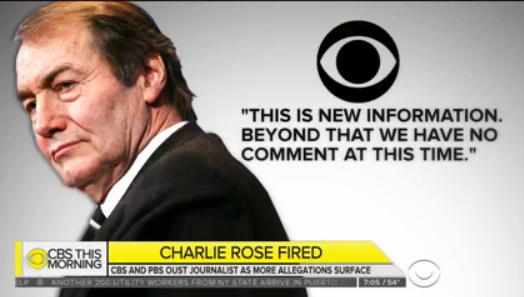 During its four minutes of reporting in the 7 a.m. hour, King, Golodryga and fill-in Vlad Duthiers offered some final thoughts.

Golodryga said it was “surreal” to be reporting the story.

“As tough as this is, it makes it even more important that we continue to follow this story and tell these women’s horrific details and their own stories,” she said.

Rose’s longtime colleague King still appears to be stunned by the news, but noted “it’s still important for women to speak up. We certainly encourage that.”

King appeared on CBS’s The Late Show With Stephen Colbert last night. She told Colbert she seriously considered canceling her appearance on his program, but decided to come on and speak out, particularly in defense of her network’s news operation.

Following the first segment discussing Rose’s firing, (which Colbert also made a central piece of his opening monologue) the two lightened the mood with what King was originally booked to talk about: Oprah Winfrey‘s annual list of her “favorite things.”