With a heavy assist from the Super Bowl and the Olympics, national TV advertising grew +12 percent in February versus February 2017, according to Standard Media Index.

Despite TV ratings being down, ad revenue for Super Bowl LII grew +3.4 percent from last year’s Super Bowl, earning $337 million for NBC. Less than a week later, NBC played host to the Olympics. SMI figures NBC earned $903 million in TV and digital ad revenue, up 10 percent from the 2014 Winter Olympics. Excluding Olympics, Grammys and the Oscars, the national TV ad spend was up +7.6 percent for the month.

Once again, cable TV news was a big growth area, with ad revenue up +13 percent in February. MSNBC showed the largest growth, up +44 percent. CNBC was also up significantly, ahead +39 percent, but that includes some Olympic programming.

The paid costs for 30-second spot in cable news prime time grew by double digits: MSNBC gained +37 percent, CNN increased +19 percent, and Fox News was up +16 percent versus what they were able to charge in prime time last February. 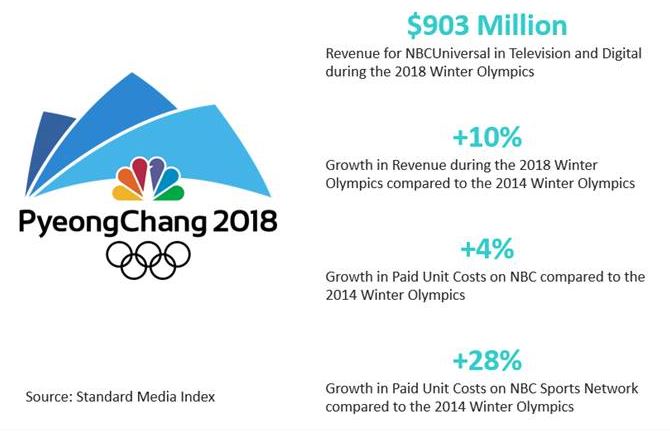