NEXT:C-SPAN Founder Brian Lamb Is Retiring
PREVIOUS:Here's How Many Watched Coverage of Attorney General Barr's Presser and the Release of the Mueller Report 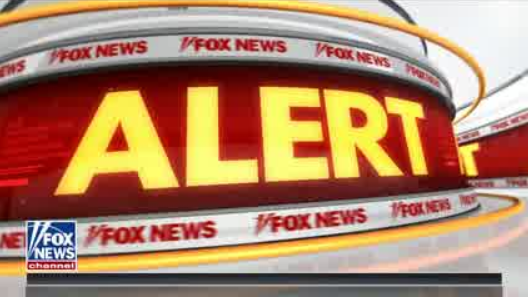 This comes as the nation seemed to be healing from the 25+ years of civil war and long history of violence.

Investigators have arrested two dozen people. Questions are being raised as to why local authorities didn’t take stronger action in advance. A police official reportedly warned security authorities 10 days before the attacks about the possibility of violence against churches.

Fox News was first to report the news on Easter Sunday. At 1:30:20 a.m. ET, FNC broke into a rerun of Greg Gutfeld‘s program with a Fox News alert:

Fox News alert multiple blast and explosions going through churches and hotels in Sri Lanka on Easter Sunday. Officials believe some of the blast were carried out by suicide bombers and a number of Christian worshipers and hotel guests have been killed by the explosions. One hospital official said more than 80 people had been admitted to the main hospital and more are on the way. Sri Lanka is predominantly Buddhist and six percent of the population is Catholic. 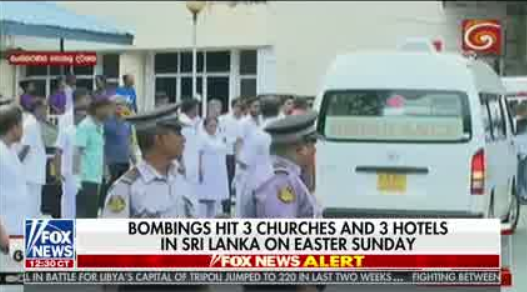 The network broke into Watters World and Justice with Judge Jeanine with Fox News alerts at various times in the succeeding hours.

Two and a half hours later, CNN, which had been airing reruns of original programming in the overnight hours, reported the news at the top of the 4 a.m. edition of Newsroom, anchored by George Howell in Atlanta: 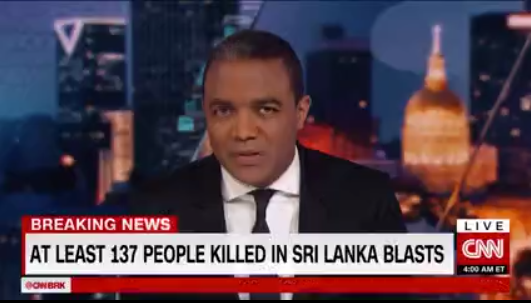 At least 137 people have been killed in six explosions according to officials there. more than 500 people have been wounded. I’m George Howell at the CNN center in Atlanta. Welcome to viewers here in the united states and around the world. state media in Sri Lanka report three explosions were at hotels, three others were at churches. and keep this in mind. the background important. All of this seems to be a coordinated set of attacks on a day where Christians celebrate Easter Sunday.

Nikhil Kumar is live in New Delhi. What more are you learning given the aftermath of these bombings?

George, the information is still coming through. the information that we have points to a devastating series of what looks like a series of coordinated attacks. Six bombings, three of them at churches on this very important day for Christians around the world and in Sri Lanka.

Hundreds have been injured. 137 killed. among them nine foreigners. This is a country in the past has seen a lot of violence. There was a decades long civil war. for many people today, this will be a reminder of that. I cannot stress enough in this case we don’t know all the details who may be behind this. The government has not pointed the finger of anyone and we don’t know of any claim of responsibility so far. All the details we do have points to a devastating set of attacks that for this country is a tragic reminder of a part it thought it left behind. The last few years have been relatively peaceful. Now a targeted set of attacks on at least this minority today. 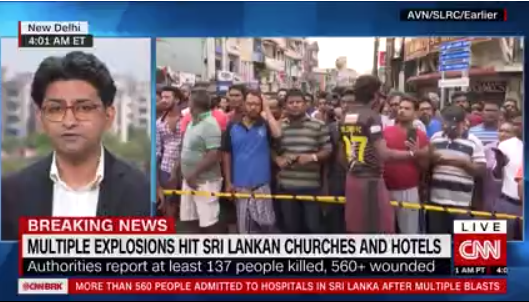 Over at MSNBC, Richard Lui broke into a rerun of Dateline Extra with the news: “A series of blasts at three churches and three hotel in Sri Lanka killed nearly 130 people. Some 500 others are believed to be hurt. at least two of believed to have been carried out by suicide bombers.”

The network then returned to Dateline, before presenting continuing news coverage beginning at the 6 a.m. hour.