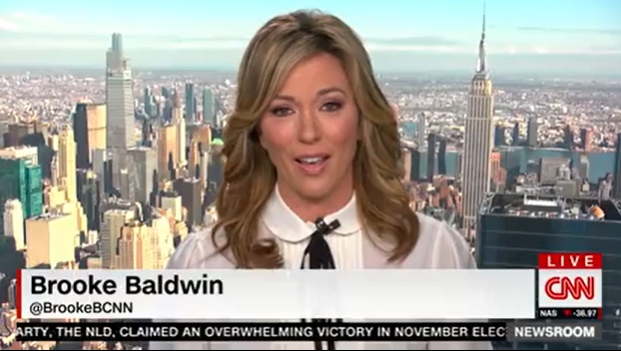 Brooke Baldwin told the CNN Newsroom audience Tuesday that she will be leaving the network in April.

Baldwin has been the face of CNN Newsroom on weekday afternoons for a decade.

Baldwin joined CNN in 2008 as a freelance correspondent based out of Atlanta (her hometown), and she ascended to the CNN Newsroom anchor’s desk just three years later at the age of 31.

Baldwin has reported from Europe, Africa and the Middle East, in addition to her work as anchor. In April 2016, Baldwin traveled to the Persian Gulf for an exclusive embed opportunity with the US Navy, reporting on the War on Terror. She traveled to Kenya ahead of President Obama’s historic visit and landed an exclusive with his half-sister and grandmother in the Obama family ancestral village.

Back in Sept. 2015, she hosted a town hall in Washington, DC with 40 people who have all been touched by gun violence, including Sandy Hook, Aurora and WDBJ-TV. That interview landed Baldwin and her team a Peabody Award finalist nomination.

In 2012, she reported live from Newtown, Ct. in the days following the Sandy Hook elementary school shooting. She was also tapped to co-anchor the network’s global coverage of the Queen’s Diamond Jubilee with Piers Morgan in London.

Viewers also know Baldwin from her partnership with Don Lemon on the network’s wild New Year’s Eve broadcast. They have formed quite an entertaining duo on that broadcast over the years.

Baldwin had a difficult 2020, having contracted the coronavirus last April, an ordeal that sidelined her for 3 1/2 weeks.

She joined CNN in 2008 after serving as a lead reporter for the 10 p.m. newscast for WTTG in Washington, D.C., where she covered the shooting massacres at both Virginia Tech and the West Nickel Mines School, a one-room Amish schoolhouse in southeastern Pa.

After most of my 20s working my way up in local news I came to this network in 2008 in the midst of the great recession as a freelancer. I remember, I scribbled my name on a post-it note and stuck it outside of this temporary office determined to fulfill my dream of becoming a full-time CNN correspondent. I wanted to be part of the best of the best in cable news and journalism and as a native Atlantan this would be my hometown team. Little did I know I would not only go on to fulfill that dream, I would flourish in this environment and land my own two-hour show in the afternoon at the age of 31.

For a decade I have never taken for granted the enormous responsibility and privilege I’ve had to work with some of the most talented producers and photojournalists and correspondents and anchors out there as we have covered our era’s urgent and most important stories, conflicts, terrorism, environmental and natural disasters, the wrath of gun violence, human interest stories, royal weddings, my person woman series, the social justice movements that define our culture and a pandemic that changed the world, and politics, lots of politics. You have been here with me every step of the way, never more so than when I was incredibly sick with Covid last year.

I am so grateful for your loyalty and passion for the world we cover and so grateful to my show team, you know who you are. To Jeff Zucker, to my very large CNN family and to you.

The next chapter of my life will be focused on what I love the most about my work, amplifying the lives of extraordinary Americans and putting my passion for storytelling to good use. for the last two years i have been working on my first book. It’s called, Huddle: How Women Unlock Their Collective Power.

There is just more I need to do; more I need to do outside of this place, outside of the walls of this place, a place I have been privileged to call home now for 13 years and, yup, we are still in a pandemic, and, no, i don’t have a job i’m jumping right into; yes, yes, I’m feeling very vulnerable, but what is it Brené Brown says? “Vulnerability is the birthplace of innovation, creativity and change.” And I am so excited about what is to come. So here goes. I really do hope you join me, and in the meantime, I will be right here with you, right here until mid-April.

1. I want to start with some personal news❤️ 📺 I will be leaving @CNN in April. I came to this network as a freelancer in 2008. I scribbled my name on a post it and stuck it outside a temporary office determined to fulfill my dream of becoming a full-time correspondent at CNN. pic.twitter.com/v4zeG5XMQX