White House assistant to the President and communications director Bill Shine has resigned. The White House put out a statement that he will serve as a senior advisor to Pres. Trump’s 2020 reelection campaign. 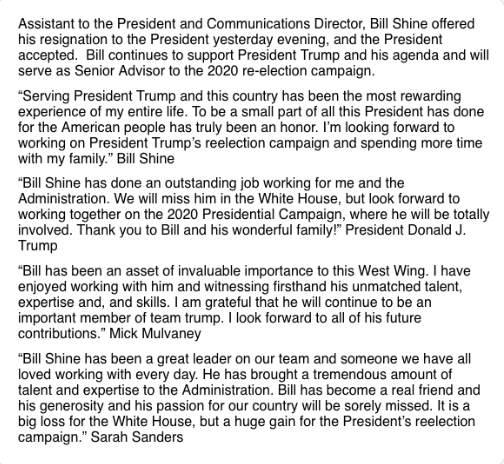 Shine’s departure comes two days after the DNC announced that it was banning Fox News Channel from hosting one of its 12 sanctioned presidential primary debates. The DNC claimed the decision was made light of a scathing story in The New Yorker about the network and its relationship with the president.

The New York Times’ Katie Rogers and Maggie Haberman published a story back in January 2019 about how the former Fox News co-president-turned-White House communications director seemed to be losing his influence over President Trump.

According to the Times, it had gotten to the point where Shine saw his role having been confined to “stagecraft,” and the President had “openly expressed skepticism about what he has done.”

Before the NYT story, there was the Hollywood Reporter story from November 2018 about how Shine was still getting paid by Fox News while working at the White House. He received $8.4 million severance when he resigned from FNC on May 1 2017, according to a financial disclosure form. Shine’s severance agreement with 21st Century Fox expires on May 1, 2019.

Before joining the administration last July, and leaving Fox News in May 2017, Shine had been a Fox Newser since the network’s inception in October 1996. A longtime friend of Sean Hannity, Shine originally came to FNC as a producer for Hannity & Colmes, one of the network’s first prime time series, before working his way up to co-president of Fox News Channel in August 2016, the month after the late Roger Ailes left Fox News.