NEXT:21st Century Fox: Irena Briganti 'Is A Valued Colleague'
PREVIOUS:Gretchen Carlson: 'Nobody Pays $32 Million to Anybody For False Accusations' 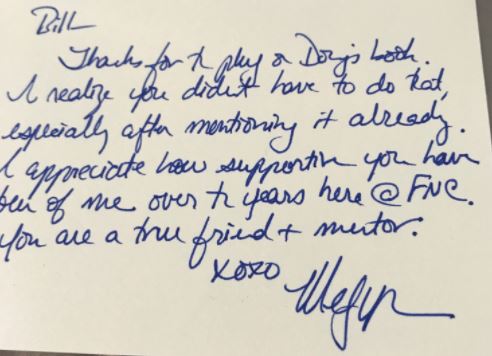 Bill O’Reilly is playing defense following this morning’s Megyn Kelly diatribe against him, and others at Fox News, who fought to silence women who claimed sexual harassment over the years.

This morning O’Reilly’s spokesman Mark Fabiani posted handwritten notes O’Reilly received over the years: two from Kelly and one from Gretchen Carlson. Carlson, Kelly and O’Reilly all once worked together at Fox News. Today, none of them does.

“The Times printed leaked information provided by anonymous sources that is out of context, false, defamatory, and obviously designed to embarrass Bill O’Reilly and to keep him from competing in the marketplace,” Fabiani wrote.

There is also this audio which was part of a Times interview conducted last week in which O’Reilly says there is “physical proof that this is bullshit.”

Bill O'Reilly to NYT reporters: "Why don't you be human beings for once?" Here's the audio https://t.co/jOvr1pJ87I https://t.co/v1MipStCWL