Former Fox News host Bill O’Reilly spent time at the White House and on Air Force One with President Trump over the weekend, presumably to do research for a “history book” he’s writing about the president.

O’Reilly says this book is not part of his popular Killing series.

The duo go back many years. Here they are watching the Yankees take on the Orioles at Yankees Stadium in 2012. (via MLB.com/YES Network) 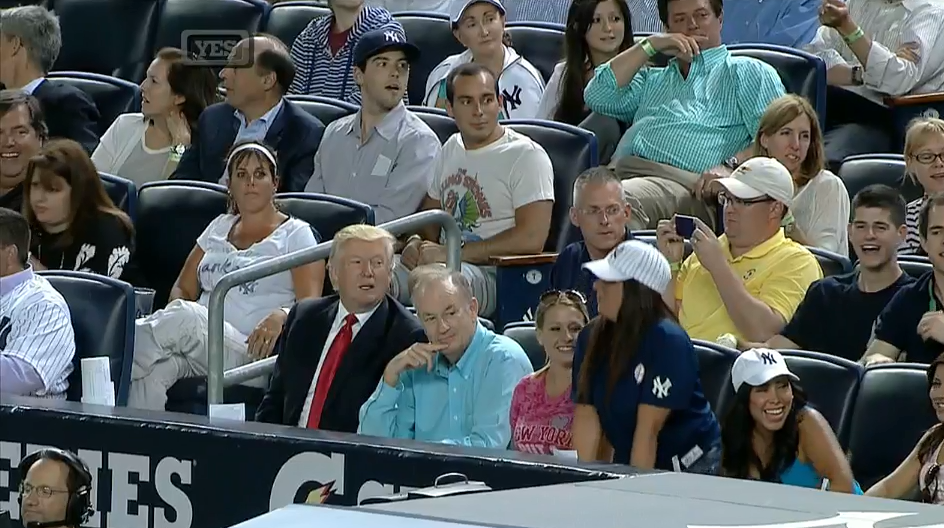 Here’s what the one-time top-rated cable news host said yesterday on his subscription-based online platform in regard to his weekend visit with Trump. The video is from the progressive media watchdog site Media Matters:

OK, let me tell you about the book. So Friday, I go to Washington and it’s always a privilege to go to the White House. I’m in the West Wing talking to a bunch people. I’ll never tell you what I say because that’s off the record, but I know a lot of people in the Trump administration for a long time, and I learned a lot, which is why I can report accurately to you every day.

So then I go to Andrews Air Force Base, this humongous Air Force One. I had never been on it. It’s the biggest machine I’ve ever seen. There I am. It’s a little chilly but, you know, I can take that. And so I go on a plane and I interview Donald Trump, the president of the United States, on the plane. There I am.

So the interview is for a book that I am writing on Mr. Trump. It is a history book. I want everybody to know that, not part of the Killing series. It’s a history book on Donald Trump. Why he believes what he believes — fascinating to me. I’ve known the guy 30, 35 years. Tough to get him to talk about his childhood, his parents, his brothers and sisters. That’s what the book’s about, and it’s about what I’ve seen, personally, over those 30 years with him.

Now I’m not his buddy. In fact, he got mad at me during the interview. He goes, “You’re torturing me.” I was — I wasn’t torturing. But I was asking some pretty intense questions. I didn’t think it was torture — I go right up to the torture line. He thought I was doing a CIA number on him. But I got what I had to get to write the book.

Now I’m not sure when the book’s going to be out. I’ve already written the first chapter of the book, but I’m not sure. But we’ll keep you posted on that. But I’ve got to tell you, it was it was such an honor for me to fly on Air Force One, to see all this up close — how our country is run. And it was really, it’s really interesting. And I’ll make one pledge: I will tell you the absolute truth in this book. This is a history book. It’s not pro-Trump, it’s not anti-Trump. It’s history.

On April 1, 2017, The New York Times reported O’Reilly and Fox News had paid out $13 million to five women to settle sexual harassment suits. That led to protests, an advertiser boycott, two public protests outside of the 21CF headquarters in Manhattan, and, a couple weeks later, O’Reilly was out.

When O’Reilly returned to Fox News later that year, on Sean Hannity‘s program, he said he regretted not fighting his dismissal over the complaints. “I have to give you all the credit in the world,” O’Reilly said to Hannity, who was under fire at the time as well, “you fought back when they came after you last spring. I didn’t. And I should have.”