NEXT:Today's AFC Championship Could Be the Final Game for Tony Romo at CBS Sports
PREVIOUS:Here’s How Business News Networks Are Covering Davos 2020 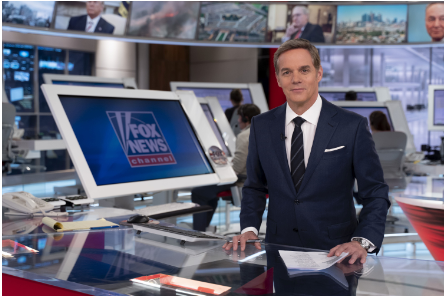 Bill Hemmer—who today replaces Shepard Smith as anchor for the Fox News’ 3 p.m. hour—rose to prominence by challenging himself.

In the early 1990s, Hemmer was young sports anchor at WCPO-TV, the CBS affiliate in his native Cincinnati, when he suddenly put his rising TV news career on hold, and decided to backpack around the world. Hemmer backpacked for nearly a year—traveling through China, India, Nepal, the Middle East, Vietnam and parts of Europe. He documented his trip, writing reports and submitting tapes for WCPO, and for The Cincinnati Post. All of these pieces were eventually combined into what would later be called “Bill’s Excellent Adventure.” That “Excellent Adventure” fetched him two regional Emmys, and a job at CNN Atlanta in 1995.

After a decade at CNN, Hemmer moved to Fox News, his television news home for the past 15 years. Hemmer has co-anchored the network’s mid-morning program America’s Newsroom for 12 years, and officially left the show this past Friday.

Today, a new challenge begins for Hemmer, and it’s perhaps the most demanding one of his career to-date: Replacing Smith, who abruptly left Fox News last October after a 23-year run, as the network’s lead news anchor, face of the breaking news unit, and as the anchor of the 3 p.m. hour, now named Bill Hemmer Reports.

We sat down with Hemmer last week at Fox News Channel’s New York headquarters, and he told us about the journey.

(The interview has been edited and condensed for clarity.)

TVNewser: My guess is you’re pleased to get a little more sleep going forward, no?

Talk about the overall importance of the 3 p.m. hour at Fox News.

I’ve been doing the morning show for 12 years. It’s been great. Megyn [Kelly], Martha [MacCallum], Shannon [Bream], Sandra [Smith] have been great partners and great people. But, I’m ready for something new and something different.

It probably surprised all of us, the way it happened. But as I look at the landscape for 2020, the things that are obvious to me… You can throw a dart on the calendar, and you know when they’re going to happen, but what you don’t know what’s going to happen in between those times. So, I think the year holds enormous possibilities, and huge potential.

How is Bill Hemmer Reports going to be different from Shepard Smith Reporting?

Shepard is probably one of the best breaking news anchors the industry has ever known. I think the secret sauce is not-so-secret in cable news. You’ve got to be on the news of the moment. You have to get newsmakers, and you have to work hard to get them. You have to bring information that people are not getting somewhere else, and if you can put those two things together, I think you’ll have success.

Shep became increasingly critical of the Trump administration as time went on, and 3 p.m. was the network’s lowest-rated hour. Do you pay attention to ratings and do you plan on taking any sort of stance on your program?

Here’s what I will tell you: We need customers in the store in order to keep the store open, so I am not going to ignore that.

I also feel that we are facing complex stories that you can’t solve in 60 minutes. My approach is to let it unfold over days and weeks and sometimes months in order to arrive at the whole picture. That’s my attitude going in, and that’s how I plan on staying. With regard to getting outside of the lane that you’re suggesting, it’s not going to happen. I respect the opinion folks in prime time. It’s never been a lane in which I’m comfortable in. I am much more content in the news area, and that’s where I plan on staying.

Shep, and more recently Bret Baier and Chris Wallace have at times found themselves at odds with the prime time hosts and commentators over their reporting. How do you plan to navigate that?

My feeling is that if you can watch my show over a period of, let’s say, a week, and you’re able to say, “that guy is fair,” or “that program is fair,” then I will consider that a success. I’m not interested in a tit for tat. They can have their opinion and they can defend it on their own merits, but I’m more comfortable in the news lane.

Will you be taking Bill Hemmer Reports on the road at all in 2020?

We’re now nearly two years into the Suzanne Scott era at Fox News. You’ve been here for 15 years; how has the network’s company culture changed since Scott took over as CEO?

She and [Fox News president and executive editor] Jay Wallace have had their hand on the tiller in a way that has been very effective. I think they’ve done a great job. I don’t know if I’m a survivor or a journeyman 25 years down the road, in a business where you find so much turnover. It’s a compliment to still be standing.

Talk local news, and how it has shaped who you are today.

I go home to Ohio a lot, about half a dozen times a year to see my family, and one of the things I find with local news now is that the operations are different. The things that we used to cover, they just don’t have enough people to get to it. I think that’s a shame for the local community. I’d like to see more control over that.

With regard to me, personally, when you think about being a sports reporter, and backpacking around the world for a year, what do those two things have in common? When you’re looking at highlights, your brain is thinking of words that can come out of your mouth to explain it to the audience. It’s very similar to this [motions towards a TV screen]: “Hey, check out monitor 4. This is the aerial picture we have from the helicopter. We’re going with it right out of the break.”

Then, you think about the travel. When I was 26, I felt if I did not backpack around the world by the time I turned 30, I was going to have a midlife crisis. I didn’t know where it would lead. I didn’t have a plan as to where it would go. I was more interested in the experience itself. I wanted to see what “it” was about with my own eyes; touching “it,” with my own hands. I think if I put those two life experiences together, it made a really good resume for people in [CNN] Atlanta to say, “You know what? Maybe we should hire this guy.”

Who has given you the best advice as you take on this new gig?

[Fox News president and executive editor] Jay Wallace. He is the guy who said: “It’s your time, Bill.” I went home and thought about it for 24 hours. When I woke up the next day, I said to myself: “Jay’s right. Let’s do this.”
< Previous Article
Next Article >
Advertisement
Advertisement
Get TVNewser delivered straight to your inbox
Advertisement