NEXT:Border Patrol Tells CBS It Doesn't Like the Use of the Word 'Cages,' Doesn't Dispute Migrants Are in Cages
PREVIOUS:CNN Adds Two Reporters to Cover Law Enforcement, Corruption 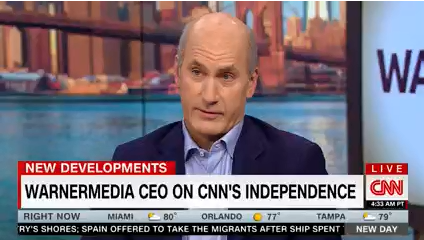 The AT&T-Time Warner merger went into effect this past Thursday, and CNN New Day hosts Alisyn Camerota and John Berman, along with CNN senior media correspondent Brian Stelter sat down with the WarnerMedia’s new ceo this morning, John Stankey.

WarnerMedia is the new name of CNN’s parent company. It was formerly known as Time Warner.

In his new role as ceo of WarnerMedia, the former AT&T Entertainment chief will oversee Turner Broadcasting (CNN, TNT, TBS, and a number of other cable networks and digital properties), as well as HBO, and Warner Bros.

Stelter asked the new boss about President Trump’s ongoing attacks on CNN and the news media, and the new company’s commitment to CNN.

Stelter: I hear from staffers, “What happens when CNN’s Jim Acosta is told by the campaign manager of the Trump campaign, you should have your credentials revoked?” What happens in that environment when it’s not Time Warner, but it’s WarnerMedia.

Stankey: First of all, Jeff [Zucker] needs to continues to do what he does, which is continue to run the organization incredibly well, and that first and foremost will continue and as you know he is here for the ride going forward and I’m really pleased and excited about it. He’s a very talented indivdiual and that will obviously be the first driver. Secondly, as I said to you  last week, we clearly understand that there’s a different obligation, a responsibility in running a news organization like this. we understand it is a two-way street, that individuals like yourself we work hard to ensure that you’re picking up factual and accurate information, and our job is owning this asset and managing with you, and we want to make sure we back you up when you’re doing your jobs well. And we’re committed to doing that.

Berman: You know it’s a heck of a time to be jumping into the news business right now.

Stankey: You know, it’s no different than the fact that this was a unique approval process.

Berman: Are they disconnected? I have to say, given the history of what the president has said about the merger and CNN in the past. Going forward, obviously we cover the Trump administration very closely and it creates a lot of complications.

Stankey: I think everything in the industry right now is more complex and difficult than it’s ever been. I think if you were sitting over at Facebook today and asking about what it’s like to run their business, the transparency dynamic that any company has to run under and the volatility it brings in the decision making, that is just part of industry today. i don’t think it is unique to our circumstances. it is broad scale across the economy right now.