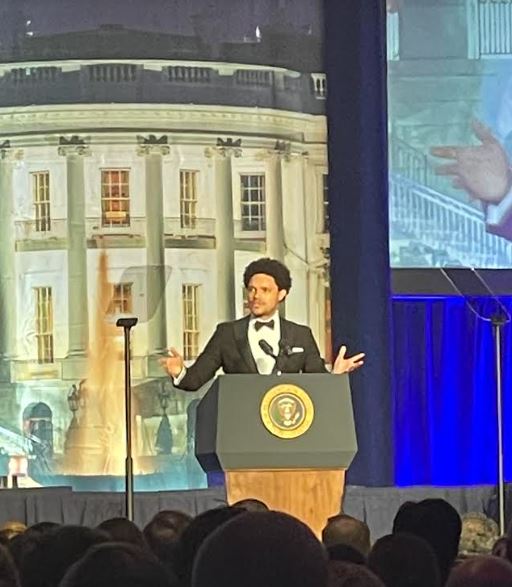 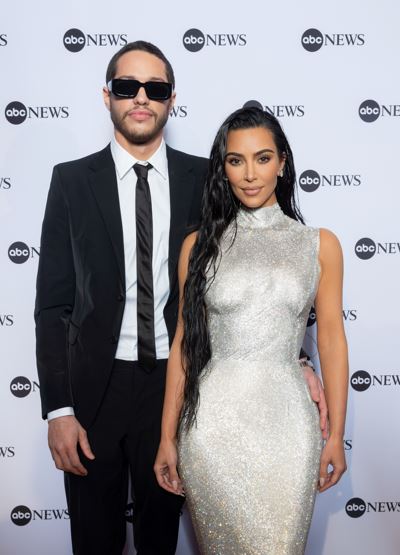 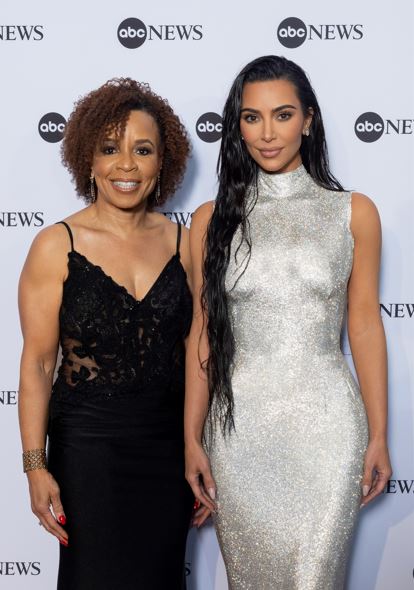 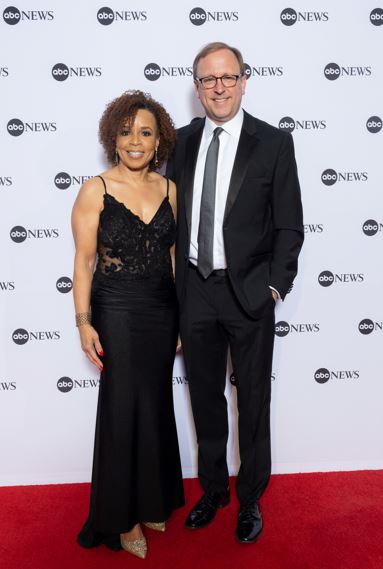 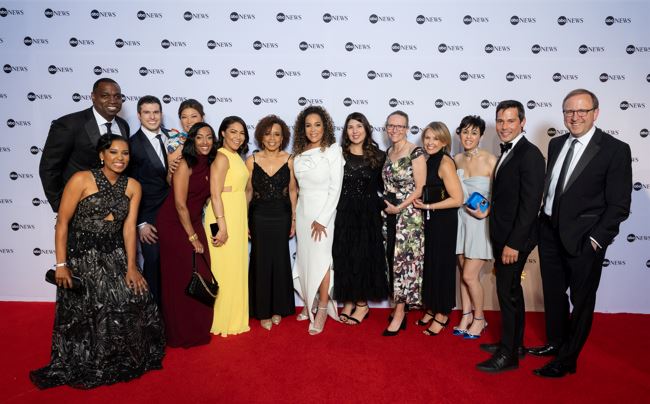 “We who enjoy the protections of a free press should remember those protections were established for the people,” said Portnoy. “It is the people’s right to decide this country’s future course; to gird our democracy we reporters believe that in the United States, no man or woman who holds or seeks power is above being questions. And our democracy depends on journalists shining light and truth upon darkness and lies and bringing accountability to officials at every level of our government.” 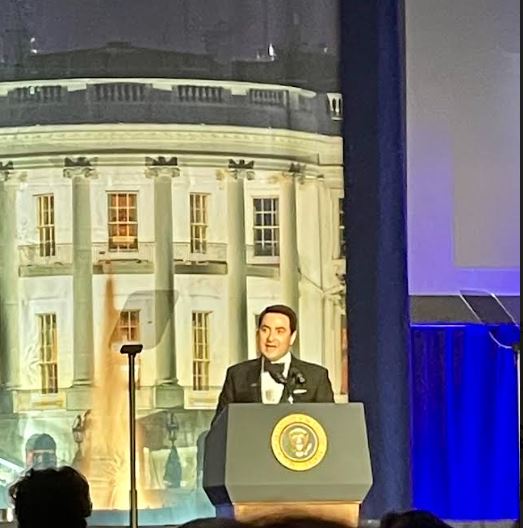 The commander-in-chief attended the White House Correspondents’ Dinner for the first time since Obama in 2016. President Biden gave his 13-minute-long remarks, quipping, “thanks to the 42% of you who actually applauded.” (a humorous riff on his approval rating), before adding he was happy to be in the presence of “the only people with a lower approval than I have.” He added, “Tonight we come here and answer a very important question on everyone’s mind: ‘Why in hell are we still doing this?'” 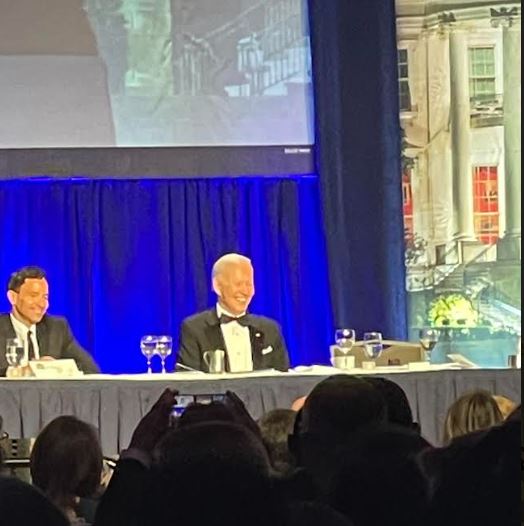 Pres. Biden then turned to the media, targeting Fox News, “everyone had to prove they’re fully vaccinated and boosted. So if you’re at home watching this and you’re wondering how to do that, just contact your favorite Fox News reporter. They’re all here—vaccinated and boosted, all of them.” He again went at Fox, “I’m really sorry your preferred candidate lost the last election. To make it up to you, I’m happy to give my chief of staff to you all so he can tell Sean Hannity what to say everyday.” He also knocked CBS News, telling the audience he was “stunned” by the network’s hire of Mick Mulvaney as a paid contributor. Thought he’d be more appropriate to appear with Rudy Giuliani on [Fox TV reality series] The Masked Singer.

Pres. Biden did get more serious, saying, “Good journalism, good satire about our leaders, about our society is quintessentially an American thing.” He also spoke about disinformation, referring to it as “a poison is running through our democracy,” adding, “The free press is not the enemy of the people—far from it. At your best, you are the guardians of the truth,” and “The truth matters—American democracy is not a reality show. It’s reality itself.” 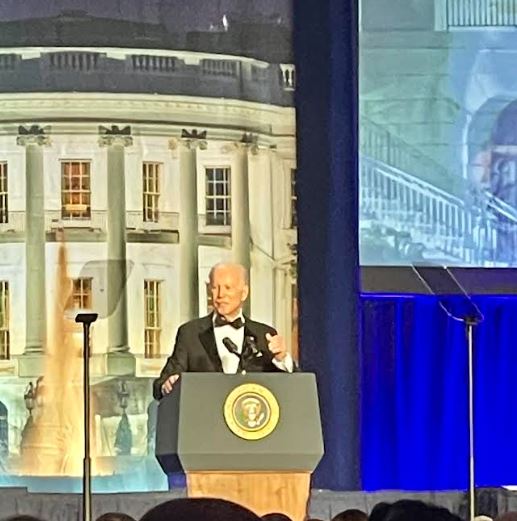 Then it was Noah’s turn to take the dais for 25 minutes—and he proceeded to thrown down a wide variety of media business zingers.

He first asks the assembled media what they’re doing in the room amid coronavirus. “Someone offers you a free dinner and you turn into Joe Rogan.”

“Everyone relax, get comfortable, but not too comfortable … Jeffrey Toobin.”

“I’m not hear to tear anybody down. I might roast you a gently, like a pair of testicles on a Tucker Carlson special … ”

Some people think this event shows the media is too cozy with the politicians. But what those people don’t understand is that you guys have integrity. You would never allow personal connections affect your ability to be good journalists. Isn’t that right, Chris Cuomo?”

“Whenever there’s a disaster in the world. Chef Andres is there. And that’s why he’s at the CNN table.”

“Despite some hiccups, President Biden has led the country through some really dark times since he took office. The Covid pandemic. The war in Ukraine. The launch of CNN+.”

“The word is Jen Psaki is going to MSNBC next month. Apparently just being on C-SPAN the ratings are too high, so she wants a little more of a challenge.”

Speaking of MSNBC, shout out to Joe [Scarborough] and Mika [Brzezinski], the most adorable HR violation in town.”

“If Jeff Zucker didn’t want his relationship to be known he could have made a show about it for CNN+.”

“CNN just brought on Chris Licht. His first order of business: hire a guy who knows how to turn off the breaking news banner. What happened with that? They just turned it on during the OJ chase and never figured out how to turn it off? News is not always ‘breaking.'”

“People need to be held accountable if they use their dad’s name to get ahead in life. And I can’t think of anyone better to do that than Peter Doocy.”

“Fox News is sort of like a Waffle House. It’s relative normal through the afternoon but watch out when the sun goes down”

“Chuck Todd is here. Chuck, how are you doing? I’d ask a follow-up, but you don’t know what those are.”

Noah concluded with a poignant message: “I made fun of the president of the United States and I’m going to be fine. Do you understand what a blessing it is? It might slip your mind, it’s a blessing. Ask yourself this question: If Russian journalists are fighting to report on what their own government is doing, if they had the freedom to write any words to ask any question, if they had basically what you had, would they be using it in the same way you do? Ask yourself that question every day. You have one of the most important roles in the world.”

The Daily Show host’s performance seemed to get positive reviews from those attendees at our table.

After the dinner, TVNewser attended the NBCUniversal and Paramount parties, held at The Reach at Kennedy Center and the French Ambassador’s House, respectively. 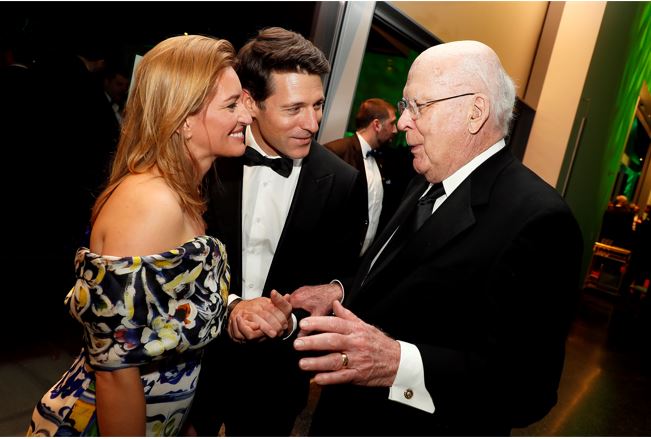 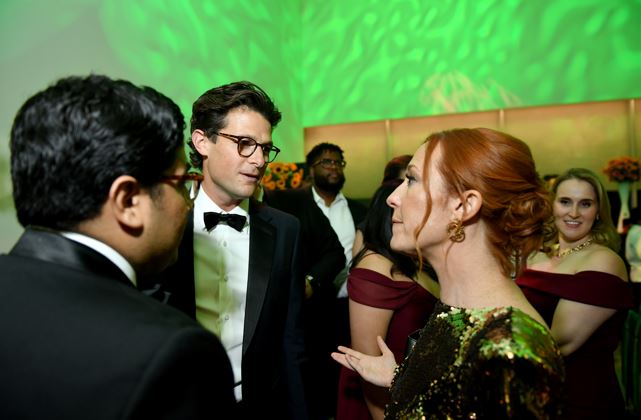 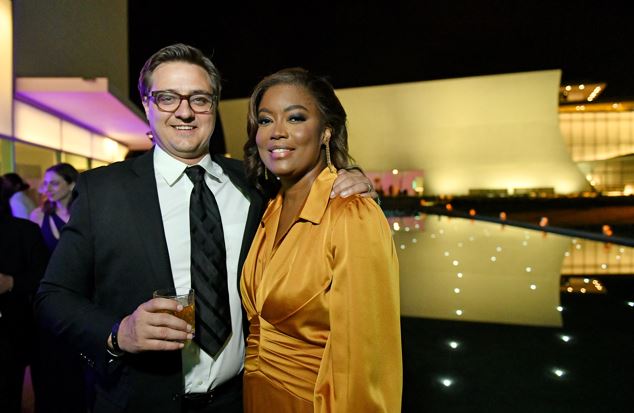 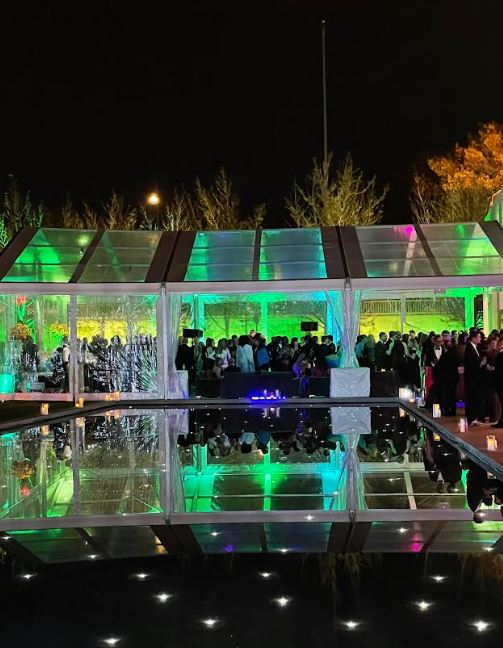 The REACH at the Kennedy Center 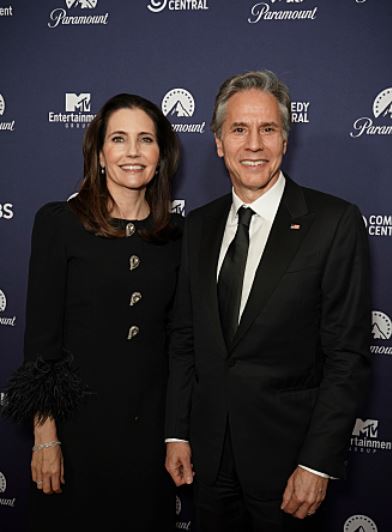 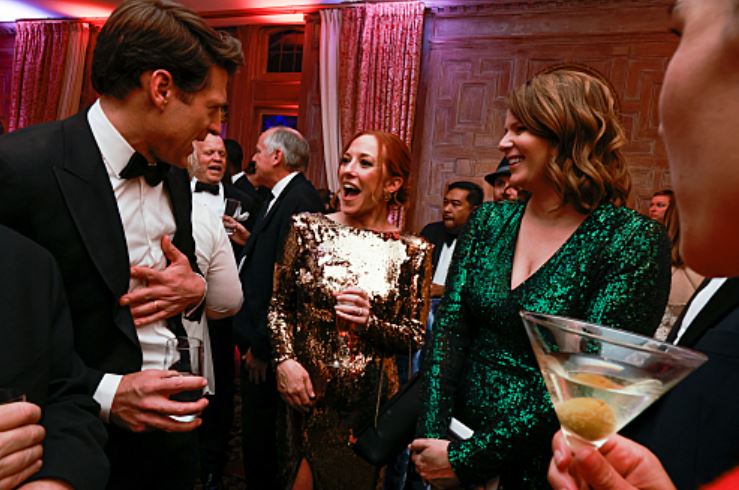 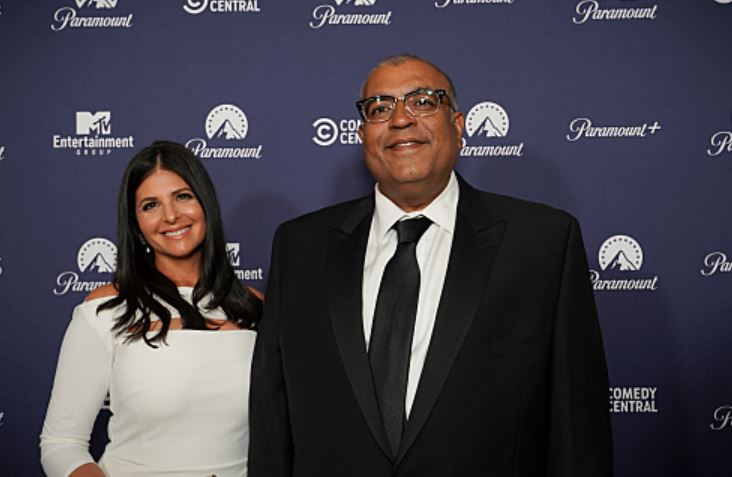 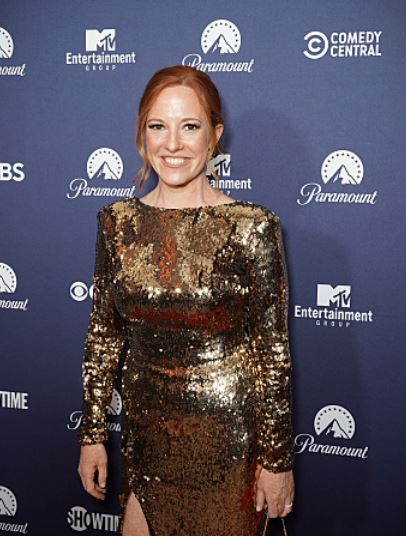 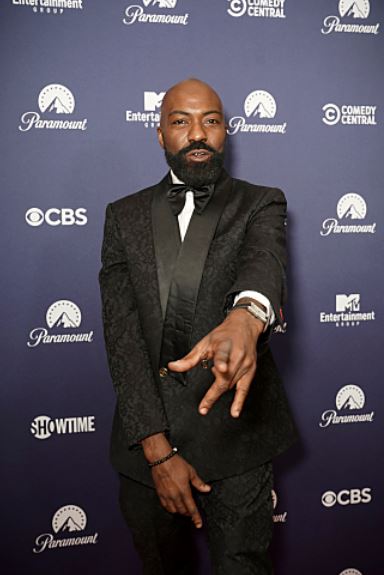 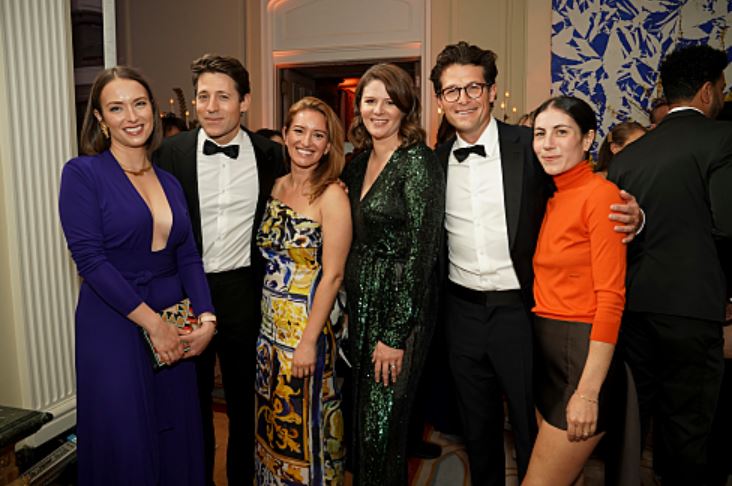 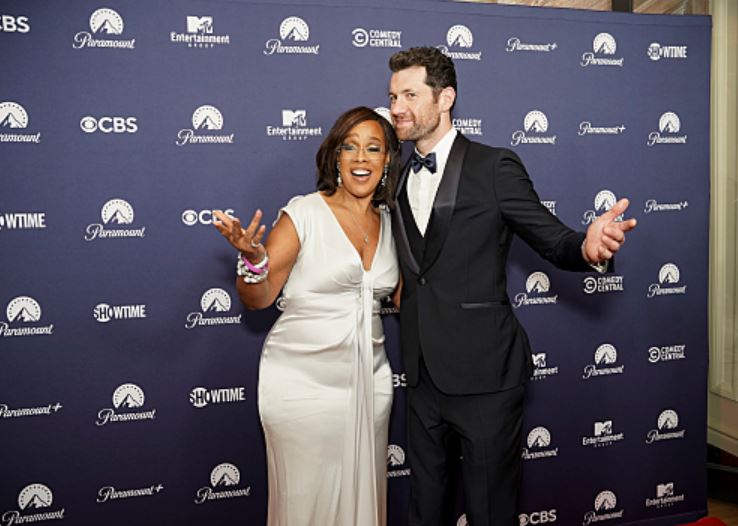 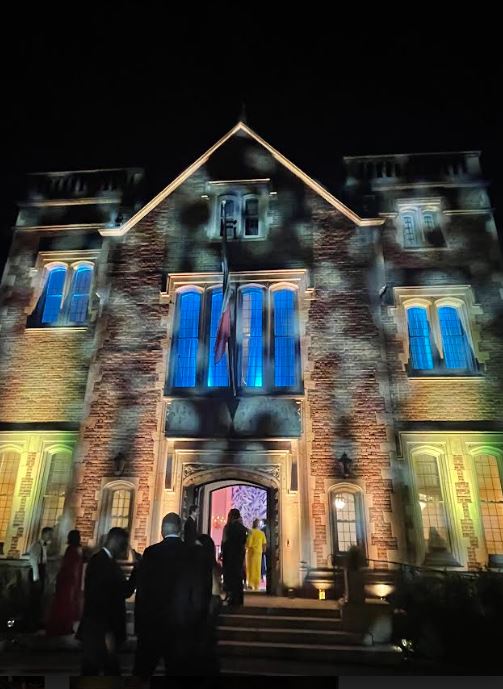