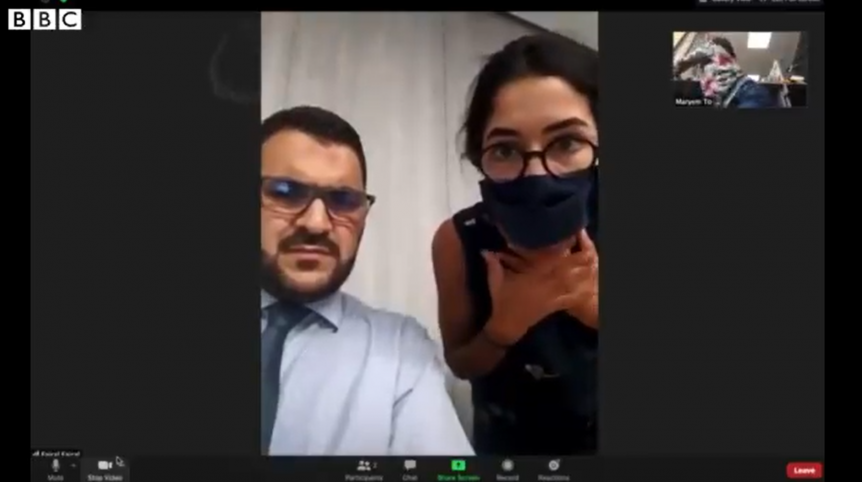 Over the past couple of days, you’ve probably seen viral video of the horrific explosion in the main port area of Beirut, a blast that resulted in the deaths of hundreds of Lebanese and has injured thousands more.

There’s a new video going viral, showing a BBC Arabic reporter named Maryam Toumi interviewing a man named Faisal Al-Asil, director of projects at the the Moroccan Agency for Sustainable Energy. Al-Asil is in the center of the screen, and was beaming in from Morocco, while Toumi is in the small square in the upper right hand corner of the screen, holding court from a building in Beirut. Then, all of a sudden, it appears the building gets caught in the explosion.

*Watch at your own discretion:

A rough translation of the tweet into English: “The moment of the port explosion, during an interview conducted by Maryam Toumi, a journalist at the BBC Arabic News office, with Faisal Al-Asil, director of projects at the Moroccan Agency for Sustainable Energy. (Warning: the video contains shocking scenes).”

Eventually Toumi picks herself up off the floor and says, “An explosion in Lebanon.” We’ve been told that she’s safe.

A BBC spokesperson updated us not long ago via the following statement: “A small number of BBC staff have suffered minor injuries in the Beirut explosion. We are ensuring our staff are supported with their physical and mental health as they continue to cover this story on the ground in the face of extremely challenging circumstances.  We are also assessing the damage to BBC buildings in Beirut which have been affected by the blast.”