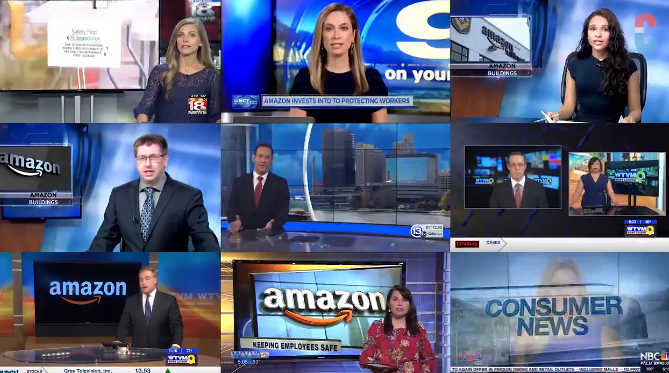 Amazon investors have been pushing the company to address worker safety after at least eight of its employees died of the coronavirus.

The company felt one way of addressing this was to produce a scripted news segment promoting safety measures Amazon has taken amid the pandemic, noting its role in delivering essential groceries and cleaning products, and then sending the segment to local stations across the country.

Amazon sent a release out to news stations via Business Wire. The release even comes with info about how to best run the segment: “Go inside one of the company’s fulfillment centers to see the unprecedented ways Amazon is using innovation to continue operating, including Covid-19 testing, disinfectant spraying and physical distancing.”

At least 10 local stations across the country took the pitch and ran the exact same Amazon news segment prior to the company’s annual shareholder meeting.

By “exact same,” we mean each news anchor read the exact same script before throwing to an Amazon-produced look “inside” an Amazon fulfillment center, which is narrated by someone named Todd Walker. The viewer may think Walker is just one of the station’s investigative reporters, but in actuality, he is an Amazon spokesman.

Koco News’ Zach Rael on Sunday tweeted that Amazon’s PR team sent the Hearst-owned ABC station in Oklahoma City its pre-edited script in an attempt to sell the story as an “inside look” at the company’s Covid-19 response.

That didn’t sit well with Rael.

Just got an email from Amazon’s PR team with a pre-edited news story and script to run in our shows. They are selling this as giving our viewers an “inside look” at the company’s response to COVID-19.

Let us go inside a fulfillment centers with our own cameras … pic.twitter.com/7mDk2xmf4O

Tim Burke, from The Courier, broke the news and identified a total of 11 stations across the country that aired the segment.

UPDATE: Amazon provided TVNewser with this statement: “We welcome reporters into our buildings and it’s misleading to suggest otherwise. This type of video was created to share an inside look into the health and safety measures we’ve rolled out in our buildings and was intended for reporters who for a variety of reasons weren’t able to come tour one of our sites themselves.”

An Amazon spokesperson added that this was not a promotional video because no one who participated in the video was paid.