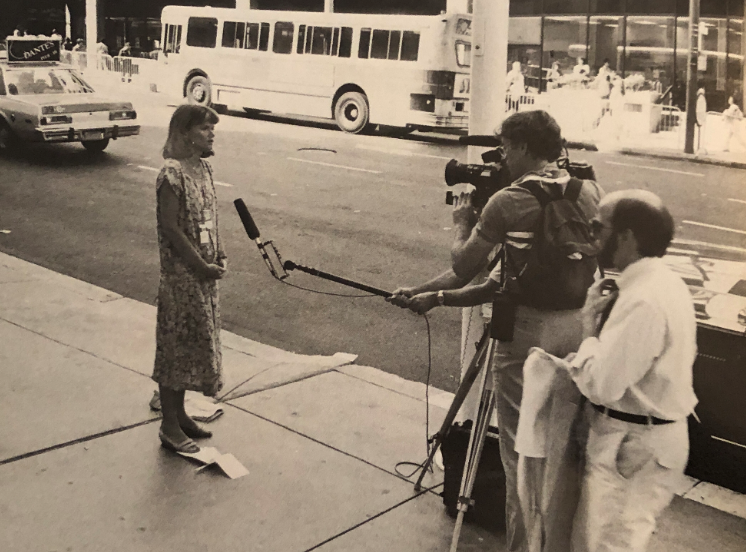 The 2020 Democratic National Convention kicks off this evening, and the four-day event will be capped off by former Vice President Joe Biden and California Senator Kamala Harris accepting their party’s nomination for president and vice president of the United States. Then, the 2020 Republican National Convention begins next Monday, with President Donald Trump and Vice President Mike Pence accepting their party’s nomination.

In advance of these unprecedented conventions, we reached out to political journalists from a variety of TV outlets to learn their most memorable convention stories; and we received some great ones.

For ABC News chief global affairs correspondent Martha Raddatz, her first convention, in 1984, also happened to be her most memorable.

“Mine was the 1984 Democratic Convention in San Francisco,” she said. “I was a local TV reporter working at the ABC affiliate in Boston and was thrilled to be covering such a huge story (California Magazine included me in its issue doing a standup outside the Moscone Center, which I thought was pretty cool as well). Walter Mondale was the nominee and Geraldine Ferraro his running mate.”

Raddatz added: “To have that many political diehards in one massive space was beyond thrilling (and the Republican convention in Dallas that followed was as well). Sometimes a little too thrilling. Without cellphones and Uber, trying to get back to the convention center after taping an interview across town had me flagging down a random car (I focused on convertibles) and begging the driver to squeeze me and my crew into the vehicle and race us to our filing point. At the end of the convention, I lost my voice. You cannot interview people in a hall like that without speaking at high volume all day and all night.”

Raddatz: “To have that many political diehards in one massive space was beyond thrilling. Sometimes a little too thrilling.”

Fox News chief White House correspondent John Roberts told us his most memorable conventions were in 2008. At the time, he was still at CNN as co-anchor of American Morning. He moved to FNC in 2011.

“My most memorable conventions were the 2008 Republican and Democratic soirees,” he said. “I was anchoring a morning show at the time and had to be up every day at 3 a.m. After staying in the arena until midnight, I would get back to my hotel room too wired to sleep, so I would simply stare at the ceiling for 2 1/2 hours, then get up and get ready for the show. I’d come back to my hotel room at about 10 a.m. to try to get in a nap, but I would be far too wired from the show—and the anticipation of the day ahead to sleep, so I’d stare at the ceiling for a while, then get out of bed again and go to the arena. This continued for the entire week of the Democratic convention in Denver and again at the Republican convention in St. Paul. I’ve gone without sleep for a couple of days many times, but never for an entire week. My boss at the time, who I am sure thought I was out of my mind, said he’d never seen anything like it.” 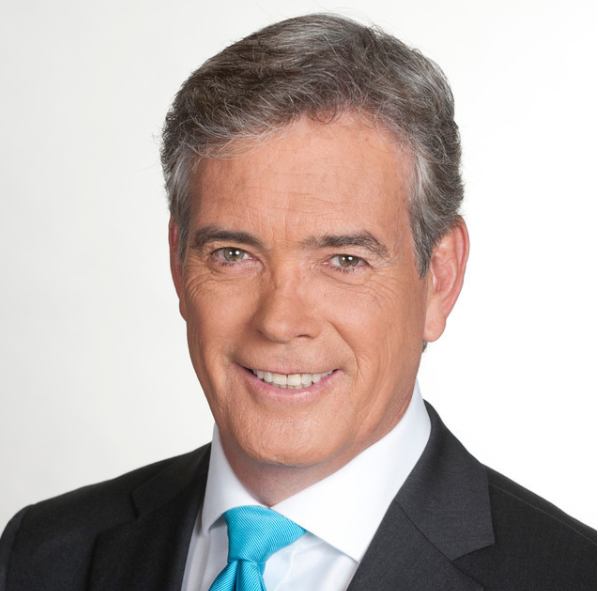 Roberts: “I’ve gone without sleep for a couple of days many times, but never for an entire week. My boss at the time, who I am sure thought I was out of my mind, said he’d never seen anything like it.”

CNN chief political correspondent Dana Bash said her memorable convention story was at the most recent one, and transpired the night Trump secured the Republican nomination for president.

“In 2016, on the night Trump would officially clinch the Republican nomination, we found out that New York—his home state–would be the state to put him over the top and get him the number of delegates he needed,” said Bash. “We knew this was coming, and we knew they were going to skip New York and come back to it at the end.”

Bash continued: “So, in the meantime, I crawled on my hands and knees to the New York section, positioning myself right near the Trump family, unbeknownst to them. The press were gathering, the scrum was forming, and they started pushing people back. But I was essentially hiding on the floor, trying to be as compact as possible. They started playing the song “New York, New York,” and I remember popping up like a jack in a box, ready to go with a microphone. I was exactly where I needed to be with the entire family. They didn’t realize I was there, and they probably weren’t thrilled about it, but I was at the right place at the right time and got an exclusive interview with four Trump children. Behind the scenes, my producer and cameraman were being crushed to death, but they kept telling me to hold the shot.” 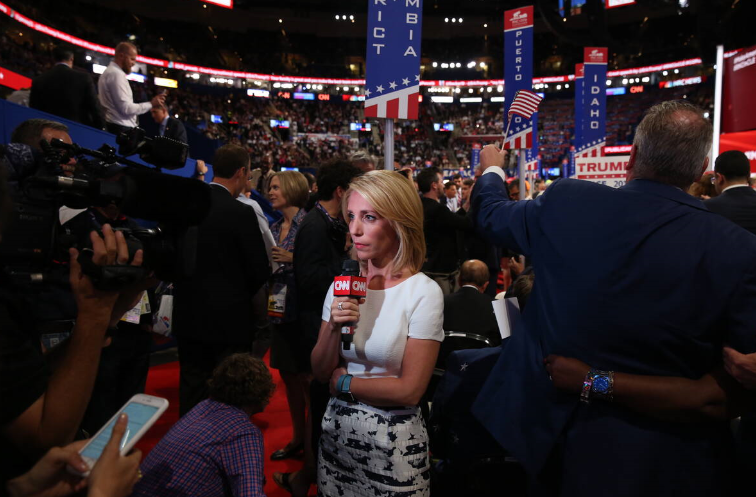 Bash: “They didn’t realize I was there, and they probably weren’t thrilled about it, but I was at the right place at the right time and got an exclusive interview with four Trump children.”

As was true for Raddatz, Fox News chief congressional correspondent Mike Emanuel said his first convention cycle was also his most memorable one.

Emanuel explained, “In August 2000, I was assigned to travel with then Gov. George W. Bush’s campaign on his battleground state tour leading to the RNC in Philadelphia. I remember flying in on the campaign’s 737 with a Bush-Cheney logo on the side of the plane. Then when we were coming in for a landing in Philadelphia, I called in to do a phoner live on Fox News. I dusted off my play-by-play skills as I narrated for the Fox News audience what was happening as we were showing live images of the Bush campaign arrival in the city. I was able to share some of the reporting I had done speaking with top advisers on the state of the 2000 campaign at that critical stage. It was a great gig for a young political correspondent.” 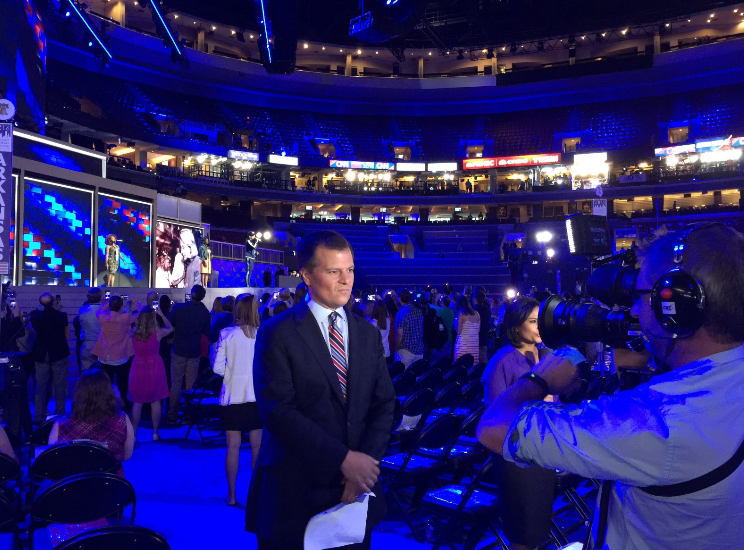 Emanuel: “I dusted off my play-by-play skills as I narrated for the Fox News audience what was happening as we were showing live images of the Bush campaign arrival in the city.”

Telemundo senior Washington, D.C., correspondent Cristina Londoño has a fascinating story of her own to tell.

“The Republican Convention in 1996 is where I got a first glimpse at how remarkable it is to experience these history-making political gatherings,” said Londoño. “I fell in love with the democratic process. To sit behind the scene witnessing negotiations, significant meetings and having the opportunity to greet some of the journalistic giants of the time was a surreal moment for me. From Tom Brokaw to Peter Jennings and Dan Rather, I felt honored to be among some of the ‘greats.'”

Her most memorable convention moment? Londoño returns to 2012. “Chasing after Benita Veliz in the rain at the 2012 Democratic Convention in Charlotte, N.C.,” she said. “’¿Tienes miedo?’ (‘Are you scared?’), I asked the 27-year-old minutes before she became the first undocumented woman—a dreamer—to ever speak at a national political convention. She told me she was, but said she understood that this moment was bigger than her fears and that this moment belonged to the millions of immigrants she would be representing. Her appearance was brief but captivating, and I will never forget her courage and poise before tens of thousands of people. As a Hispanic journalist, it is a moment I reflect upon often.” 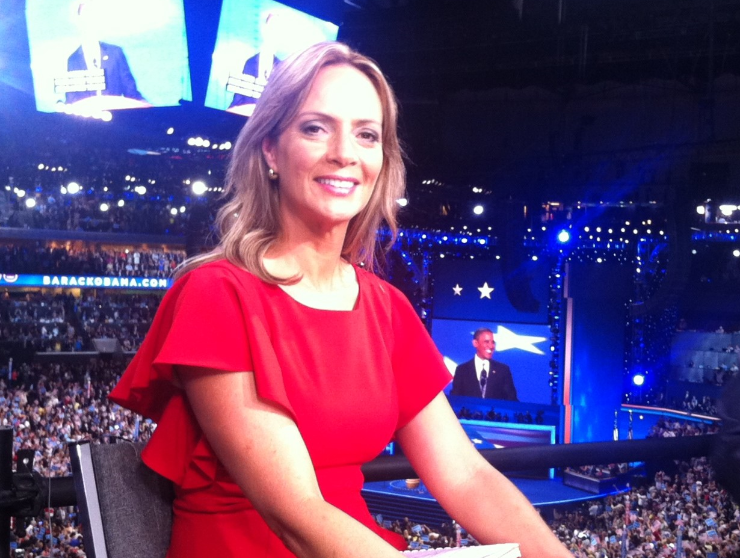 Londoño: “Her appearance was brief but captivating, and I will never forget her courage and poise before tens of thousands of people.”

Here’s a tweet from the vp of New York area-based news organization, News 12:

1976, GOP convention, Kansas City. I was in high school color guard for Natl Anthem to kick off last night. Very stressful carrying the US flag before a natl audience. We were given seats in the rafters of Kemper Arena. Fell asleep during Ford’s speech.