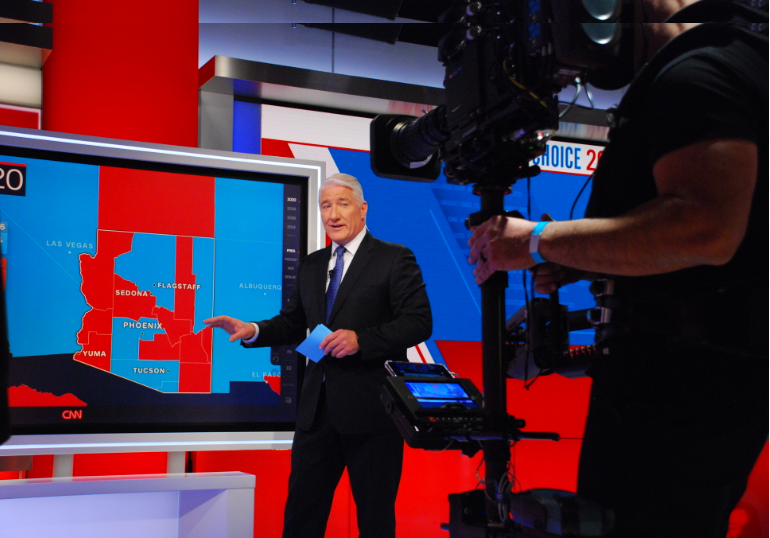 Last week was an especially intense one for the television news industry. Staffers, both in front of and behind the camera, logged tons of hours to deliver the most up-to-date, comprehensive election coverage possible.

In this week’s #AskNewser, we caught up with some of the TV newsers who spent the most time on-air last week—CNN’s John King, the Fox News trio of Bret Baier, Martha MacCallum and Bill Hemmer, MSNBC’s Katy Tur and Ayman Mohyeldin, and CBS News’ Norah O’Donnell—and got their secrets to powering through the grueling week.

Baier and MacCallum co-anchored FNC’s election week coverage for roughly 10 hours each day, while Hemmer manned the “Bill Board.”

Tur and Mohyeldin anchored overnight election coverage throughout the week—19 hours in all—while also anchoring their dayside shows for MSNBC.

O’Donnell led CBS’ special coverage throughout the week, including prime time special reports. She also joined other CBS shows to offer her analysis and continued to anchor Evening News each night. Her time on camera accompanied her countless hours off camera preparing and reporting.

TVNewser: What was your secret to making it through last week’s marathon of election coverage?

King: No secret: great events and stories are adrenaline factories. I do a lot of walking and treadmill work to keep the legs strong (still holding out, at 57, to my dream of catching in the big leagues!) and a good mix of water and coffee does the trick. We are in this business to be a part of covering big moments. It was a long week, but the one-hour-at-a-time approach worked.

O’Donnell: The secret of making it through was essential gratitude and loving what you do. I was honored to be leading the coverage for CBS and having a front row seat to history. I was also impressed by how smoothly the process went given it happened during a pandemic and how Americans adapted to voting during this time … [Also], adrenaline! It was definitely the excitement of the presidential election and the record turnout kept us all going, but I must admit in the days after Election Day, there were a couple times we crashed in the afternoon.

Mohyeldin: The secret was that we were working with a great and dedicated team of producers who kept the wheels running non-stop and stayed on top of everything seamlessly. Plus, my amazing wife, who knew I would be out of commission for those long days, gave me peace of mind.

Tur: I second what Ayman said about the producing team. They were the scaffolding that kept us up, alert and informed. Beyond that, I want to say naps, but I have an 18-month-old, a husband, a mother who texts non-stop about election results and a vicious curiosity that glued me both to my television and the hellscape of Twitter. So I guess the secret is keeping your phone on and being a bit of a news junkie.

MacCallum: There’s a lot of adrenaline in election coverage, and coffee. It’s afterward that it catches up to you.

Baier: Coffee and adrenaline from covering a story that has implications here and around the world. 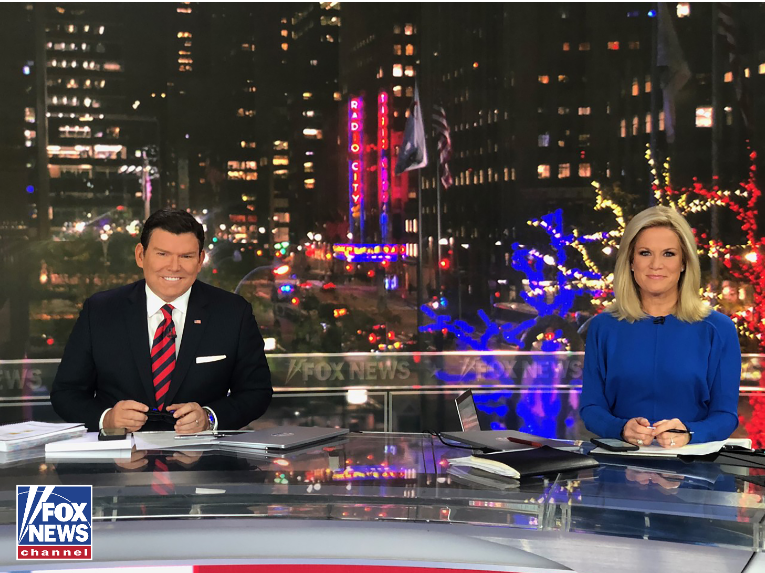 Hemmer: Nothing too crazy. Extra latte here and there. During these dynamic stories, information is our bloodline. The data and storyline creates its own energy and adrenaline.

Did you develop a daily routine? If so, what was it?

King: Our hours kept shifting as the count dragged on, so it was hard to keep any true routine. But there are basics: I like a walk outdoors in the morning to clear my head, even if it’s a short one looping my neighborhood, and reading through vote updates. Couldn’t see my 9-year-old son much during the Tuesday-Friday stretch, so finding any time for a quick text or FaceTime was important.

O’Donnell: There was no way to have a specific routine because we were on call 24/7 for the results and any breaking news. A couple of mornings, I tried to get a workout in with my trainer Kira, but there were a lot of early mornings and late nights that made it hard to fit one in. Coffee was the only routine. 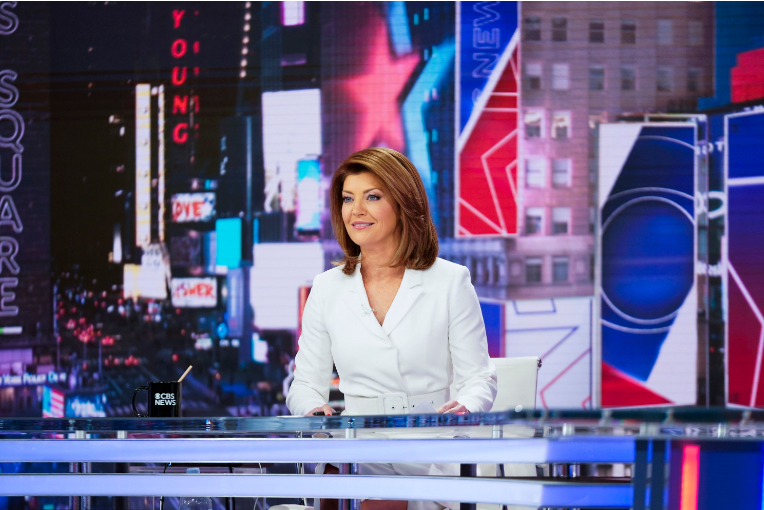 Mohyeldin: My daily routine was a combination of being glued to the TV or my phone, interspersed with coffee runs every few hours.

Tur: I got home from the overnight shift around 5:45 a.m., washed the indecision off, scrolled through Twitter a bit, and then passed out for a few hours. I set my alarm for noon everyday, but kept waking up at 9:45 a.m. Then I was back to my TV and phone. After my show I tried to nap but I just stared at my ceiling, so I gave it up and surrendered to the flow of election adrenalin. Once 11 p.m. rolled around, I took a shower and drank a strong cup of coffee. It helped trick my body into thinking it was the start of a new day.

Baier: It started as Election Day but became election week. I aspired to work out but didn’t.  I would wake up, meet my assistant Katy—who had a breakfast sandwich and a coffee for me—walk to the bureau and start reading in and making phone calls. Martha [MacCallum] and I would anchor 11 a.m.-1 p.m. and then 6-8 p.m.  We’d grab dinner and I would crash.  Waking up to the sound of the alarm, much like Groundhog Day the movie.

Hemmer: A routine? No chance. The story was moving too quickly for a routine. 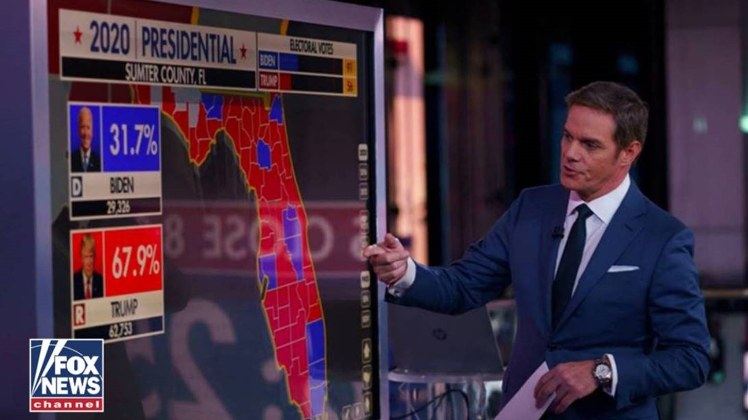 How many hours of sleep did you get?

King: 2.5 after the first long night (on air until about 3 a.m.). About three hours Wednesday and Thursday nights. I believe I got four Friday into Saturday. I had a ton of work on my Sunday show to do late Saturday when we were cleared from coverage, so I only slept maybe three hours. But Sunday night I slept six hours and have been averaging about six this week after (which is about normal for me). It has long been my motto that sleep is overrated. I don’t really mean it, but it helps rally me!

O’Donnell: I averaged about five hours of sleep a night.

Mohyeldin: I slept about two hours at night from around 8-10 p.m. and two hours in the morning from around 7-9 a.m. I did that every day we were anchoring overnights. I also managed to squeeze in a nap or two.

Tur: Roughly four? A doctor would say, it wasn’t enough. But I never fell asleep on set! Addendum: My husband [CBS This Morning co-anchor Tony Dokoupil] adds, “It wasn’t enough. You lost your mind over a green juice by the end of the week.” 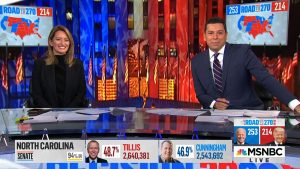 MacCallum: About 3 a.m. on election night [morning] from 5 a.m. until about 8 a.m. Then we were back at it until basically 10 p.m. Saturday night.

Baier: It’s never enough but it got better through the week. The first night/morning I got three hours sleep. The second night five hours, and third and fourth night, five and six hours.

Hemmer: One of my nephews texted the same question. At that point, the count was five hours and 45 minutes over a three-day span. Never enough.