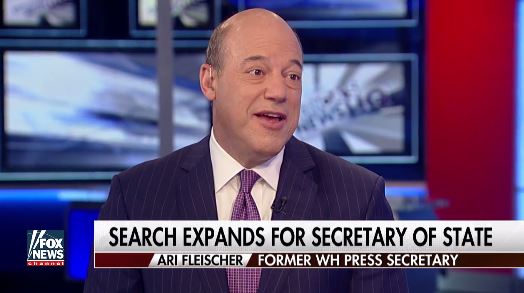 Fleischer has been named to a contributor role.

“I very much look forward to joining Fox and to sharing my perspective on national, political and governmental events. When it comes to coverage and analysis of Washington,” said Fleischer in a statement. “Fox has a powerful and important voice and I’m proud to join them.”

“Ari’s decades of experience in political communication and immense knowledge of the White House and its interactions with the press will add valuable insight to our programming,” said Jay Wallace, president of News.

Fleischer was White House press secretary from 2001 to 2003. He was senior communications adviser and spokesman for Bush’s presidential campaign beginning in 1999. Perino was Bush’s final press secretary, from 2007-2009. She joined Fox News a few months after leaving the administration and is now a co-host of The Five.