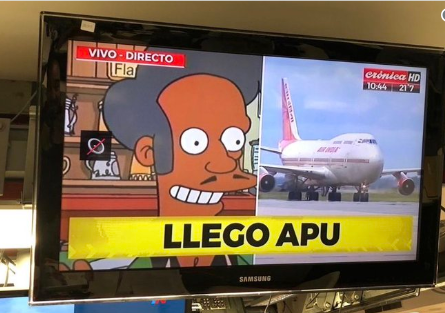 The Argentine TV news network Crónica is receiving criticism for its decision to show the below graphic when India Prime Minister Narendra Modi arrived in Buenos Aires for the G20 summit.

Yes, that’s Apu, the Indian shopkeeper from The Simpsons.

The network also sampled the music from Slumdog Millionaire as background music for the Indian PM’s arrival, and flashed the words “Chiqui Chiqui Chiqui” across an image of Modi to mimic the music of the song.

This couldn’t be true, right? https://t.co/xiEzNgpXip

Upon the arrival of the Rwandan president Paul Kagame, Crónica TV said, “There is no auction.”

It’s true that Crónica is known in Argentina for its provocative, tabloid-like content, as the below tweet states:

100% true. TV Channel Cronica TV is famous for mocking at everything and being as politically incorrect as possible. Of course, you can imagine the local target audience for this kind of stuff. The problem is, that they don’t just make a joke and move on, they are very persistent

Nevertheless, content like this is pretty ugly and probably shouldn’t make it onto a TV news network.