NEXT:Monday, April 27 Scoreboard: Fox News Begins Week With Win in Prime Time and Total Day
PREVIOUS:#AskNewser: What Has Working From Home Been Like for You as We Enter Month 3? 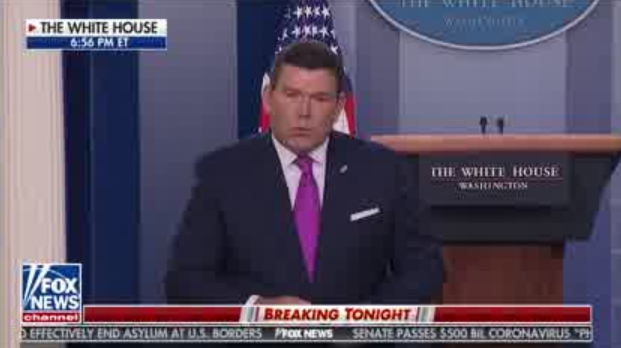 April 2020 is the most-watched month ever in prime time for Fox News Channel, and a number of its programs delivered their largest audiences ever.

Leading the way across the cable news landscape is Special Report with Bret Baier, though the April 2020 No. 1 finish comes with a bit of an asterisk. The daily White House coronavirus task force briefings, which have attracted a massive audience to the network on a daily basis, usually air during Baier’s 6 p.m. hour.

Nevertheless, this is a nice achievement for Baier’s 6 p.m. hour on Fox News.

The Five was the second-highest-rated cable news show of the month. The program usually benefited from being the lead-in to the daily briefing. Some of the briefings also kicked off during the second half of the program.

Tucker Carlson Tonight moved past Hannity in prime time, breaking the latter’s 13-month streak as the No. 1 show on prime-time cable news. Carlson finished April No. 1 on cable news in Total Viewers and No. 1 in Adults 25-54.

Hannity was the No. 4 cable news show of the month in the relevant measurements of Total Viewers and Adults 25-54, according to live-plus-same-day data from Nielsen.

The Story with Martha MacCallum received some of the coronavirus task force audience and came in at No. 5.

Laura Ingraham had the No. 6 program on cable news for the month. The Ingraham Angle earned its second highest-rated month in Total Viewers and the demo.

Rachel Maddow, Neil Cavuto, Bill Hemmer and Dana Perino rounded out the top 10, meaning nine of the 10-most-watched cable news shows for April were of the Fox News variety.

Cuomo Prime Time was CNN’s most-watched show of the month, averaging 2.55 million viewers in the 9 p.m. hour. That’s No. 16 overall. CNN did not place any of its programs among the top 10 in Total Viewers. However, the network did fare better in the Adults 25-54 category, and we’ll show that in the second half of this story.

Lifted by the daily briefings, which have been taking place between 5-8 p.m. ET, Special Report with Bret Baier and The Story with Martha MacCallum are finishing April as the top two cable news shows among Adults 25-54. In fact, Fox is averaging more than 1 million demo viewers in the 6 p.m. hour, a wild number for an entire month.

Tucker Carlson Tonight took the No. 3 spot in the demo, ahead of Hannity, who finished No. 5.

The Five ranked No. 4 in the demo.

The Ingraham Angle came in at No. 6.

Chris Cuomo had a rough month, health-wise. He contracted the coronavirus, and instead of taking some time off, decided to broadcast his program from his basement. He became a story behind the story. His broadcasts received a ton of attention, and his ratings were strong enough to land him at No. 7.

As was the case for Special Report, CNN’s 6 p.m. hour, which includes The Situation Room with Wolf Blitzer, primarily consisted of the daily briefing (there were some occasional break-ins to fact-check the president’s statements). It’s not surprising to see that the network’s 6 p.m. show found its way into the top 10 among Adults 25-54 (No. 8). CNN’s 7 p.m. show Erin Burnett Outfront and 8 p.m. show Anderson Cooper 360 rounded out cable news’ top 10 in the demo.

The Rachel Maddow Show was MSNBC’s top-rated show, but dropped to No.13 for the month among Adults 25-54.