NEXT:Bill Weir to Host Six-Part Series for Discovery Focusing on the Work of Law Enforcement at the Border
PREVIOUS:MSNBC's Road Warriors Say Most Americans They Encounter are Sick of Division and Tribalism 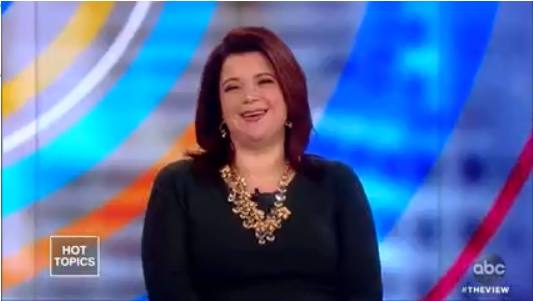 Fans of The View have become accustomed to seeing Ana Navarro as a fill-in host in recent months.

It appears they will be seeing her on a more consistent basis because Navarro has been named a co-host on The View, appearing on Fridays.

Joy Behar announced the addition at the top of today’s show, and Navarro herself tweeted out the news.

Some personal news…stating today, I am happy to be joining the ladies around the table as a Friday Co-host on “The View”.
‘View’ Adds Ana Navarro as Guest Host – Variety https://t.co/iu63Hq4wxk

The Republican strategist, CNN contributor, and outspoken critic of Pres. Trump will round out the Season 22 panel, which is currently comprised of Whoopi Goldberg, Joy Behar, Meghan McCain, Sunny Hostin, and Abby Huntsman.

Goldberg takes Fridays off as the moderator, which is why the show needs a sixth cast member at the Hot Topics table.

Navarro had reportedly been a front runner for the panelist job on a permanent basis (a job that eventually went to then-Fox News host Abby Huntsman), but negotiations “fell apart due to salary demands.”

She will remain a CNN contributor, in addition to her new role as a co-host on Fridays.