NEXT:Scoreboard: Tuesday, Dec. 18
PREVIOUS:Top German Reporter Is Losing Two CNN Journalist Awards After It Was Discovered He Made Up Stories 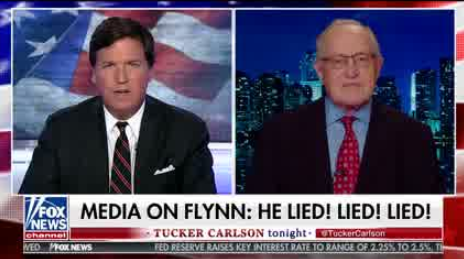 High-profile defense lawyer and legal professor Alan Dershowitz has become a Fox News fixture as of late for his role as a frequent defender of the president. He appeared on Tucker Carlson Tonight yesterday to talk about the legal details in the case of former National Security adviser Michael Flynn, who will be sentenced in 2019 for lying to the FBI. Before diving into the conversation, Dershowitz had something he wanted to get off of his chest, giving Carlson with his thoughts about the host’s controversial remarks about immigration made on the broadcast last Thursday.

“I hate boycotts and attempts to censor free speech,” said Dershowitz. “I’m in favor of complete dialogue, but as such, I feel compelled to tell you that I—with due respect—disagree with the way you categorize mass immigration. That’s all. I just want to say that.”

Carlson responded, “By the way, I would expect that you would. We differ probably on a lot of the issues. The one issue we agree on and I respect you for is your willingness to see you what you think in public to defend your views, to have a conversation and to let others decide which side is right and that’s something that I wish we were able to do a lot more of. But you are one of the only liberals had who will come on this show.”

Dershowitz added: “I wish you hadn’t used that language. Language like that was used to describe my grandparents and great-grandparents and probably some of yours. So let’s move on.”

Carlson, before moving on, added: “Actually, just in point of fact since you brought it up, as noted on Monday, that was in context of a conversation with an elected official in Tijuana about the filth of his city and he was complaining about how dirty it had become which was a byproduct of the policy decisions pushed by the American Left.  I would never describe people as inherently dirty. I don’t think they are and pro-people. That’s why I’m against abortion. Strongly. I think it was clear and I think that the people who are mischaracterizing it are always welcome on the show to talk it through and to hear my side and I will hear their side because, again, this is one of the last forms in America for open conversation.”

Nevertheless, the advertiser boycott persists. One week later, the number is 20 and perhaps growing going into the long Christmas weekend. According to the Hollywood Reporter, Samsung, SodaStream, Pfizer’s Robitussin and SanDisk said on Wednesday that they’re pulling future advertising from Tucker Carlson Tonight. But not necessarily Fox News altogether.

There only four ad breaks during Wednesday night’s broadcast, down from the traditional five per hour.

While many advertisers and folks in media circles condemn the remarks and the sentiment, Carlson does have some supporters.

The Young Turks’ Cenk Uygur said Tuesday on his program that, “We all have to work harder to address the root causes instead of trying to put a band-aid on it by banning things…I think as odious as Tucker Carlson’s comments are, he gets to make that and we get to make the counterargument. It’s not a First Amendment issue…” Uygur added that advertisers that influence commentary “shuts down all conversation in the country.”

“As much as the Carlson show pains me, the calls by activists for an advertiser boycott pain me more…I’ve been watching TV news and reading newspapers and magazines for a lifetime. The notion that an advertisement should constitute an automatic endorsement of a program or news article comes as a novel argument to me. My understanding has always been that advertisers buy space because they want to attract the attention of the eyes and ears drawn in by news. If we’re going to interpret ads as forms of validation for content the ads are adjacent to, does that mean Staples and Comcast, both of which advertised in today’s Washington Post, endorse the Post’s news coverage and opinion columns, or that Bloomingdale’s and Johnson & Johnson approve of the editorial drift of the New York Times because they just took out full-page ads? Not in my media universe.