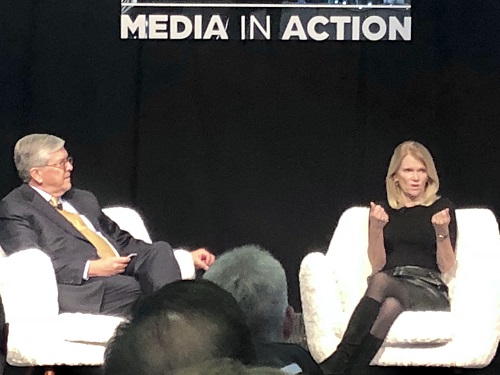 ABC News chief global foreign affairs correspondent Martha Raddatz sat down for a conversation with NAB president and CEO Gordon Smith for a keynote at the second and final day of the 2018 NAB Show – New York.

Smith, a former Republican senator from Oregon and member of the Senate foreign relations committee conducted a wide ranging interview. The former Senator asked Raddatz about her career path, her local news background (this is the NAB Show after all!), moderating presidential and vice president debates (which she compared to preparing for the SATs and then taking the test in front of 60,000 people), as well as some of the most significant stories she’s covered, some of which include the death of Osama Bin Laden, her reporting on the First Cavalry Division in Iraq, which aired across all ABC News programming, and when the U.S. killed the jihadist Abu Musab al-Zarqawi in 2006, the latter of which Raddatz got the scoop on.

Sen. Smith also asked Raddatz for her thoughts on Saudi journalist and global opinions contributor for the Washington Post Jamal Khashoggi, who is believed to have been viciously murdered more than two weeks ago in the Saudi Consulate in Turkey.

The allegation is that someone in the Royal Family had something to do with it, as the senator noted.

“You better ask a lot of tough questions and it sounds like the U.S. intelligence is more and more suspicious that he was murdered,” said Raddatz. “I’m sure you saw a couple of days ago that were reports that the Saudis were going to come out and say it was a ‘rogue operation gone wrong’…if the reports are true that he was in that room and his fingers were cut off, that’s not ‘gone wrong.’

But I’m sure this will be investigated, that the U.S. knows more than we know they know at this point,” Raddatz continued. “And I certainly hope if they find out that those stories are true that something is done about that.”

Raddatz added: “If you heard President Trump say that there would be ‘severe consequences’ if they found out the King or the Crown Prince was involved or knew about that. I certainly hope they go beyond an investigation of the Saudis investigating themselves.”