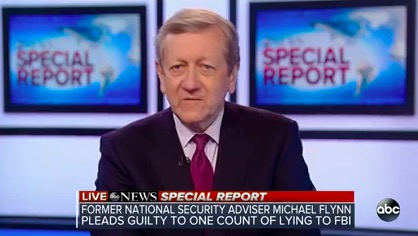 On ABC Friday, following news that former National Security Advisor Michael Flynn had pleaded guilty in the Russia probe, correpsondent Brian Ross reported during an on air special report that Flynn, “is prepared to testify that Pres. Trump–as a candidate, Donald Trump–ordered him, directed him to make contact with the Russians, which contradicts all that Donald Trump has said at this point.”

ABC was forced to first clarify, then correct Ross’s reporting online and on air.

“David, a clarification on something one of Flynn’s confidants told us and we reported earlier today,” Ross said at the end of his World News Tonight story. “He said the president asked Flynn to contact Russia during the campaign. He’s now clarifying that saying, according to Flynn, candidate Trump asked him, during the campaign, to find ways to repair relations with Russia and other hotspots. And then after the election the president-elect asked him–told him–to contact Russia on other issues including fighting ISIS.”

Interestingly, for all his tweets about Fake News, Pres. Trump hasn’t mentioned ABC’s mistake and correction (at least not as of this writing). But, given that it’s about the Russia investigation, perhaps that’s not surprising. Trump’s former press secretary, however, was among those crying foul on twitter last night:

.@ABC “news” owes it viewers an apology. Calling false reporting a “clarification” is a cop out and just another reason for the decline in trust of the media

I don’t believe it was deliberate – I do think it was a terrible mistake and very sloppy journalism that impacted the market and ABC has some explaining to do and why did other news organizations repeat it??? https://t.co/V8kFXmuroj

“Never, ever listen to anything @BrianRoss reports unless and until it has been confirmed by another, better, reporter.”https://t.co/m67yuc9qoS

You just knew this report was wrong as soon as ABC and Brian Ross reported it. https://t.co/IMQSARzPGy