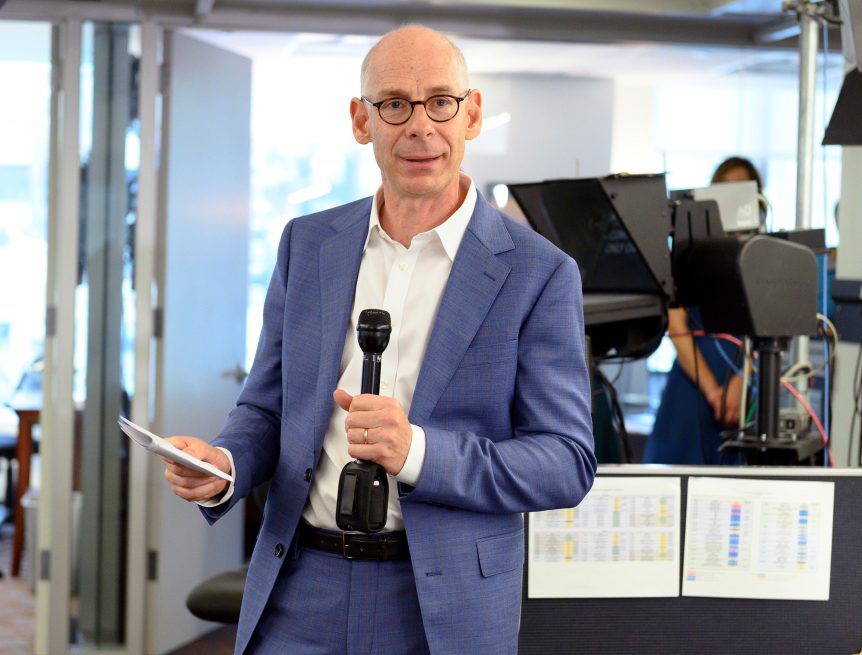 Here’s something we didn’t see coming today: After 17 years at ABC News, and the past seven as news division president, James Goldston announced Thursday that he is leaving the company.

His last day at ABC News will be March 31.

In an internal memo staff, Goldston noted that he had planned to leave after what had been an extremely intense election season.  “After a great deal of reflection over the last few months, I’m ready for a new adventure,” he wrote.

Goldston added: “We’ve welcomed The View and FiveThirtyEight into the ABC News family.  We’ve launched ABC News Live and watched its stupendous growth with awe. We added a third hour of GMA that proved so valuable to our audience in the last year as the pandemic swept across the country.”

Goldston’s exit does come six months after the ouster ABC News talent chief Barbara Fedida. Goldston himself was rumored to have been on his way out since Fedida officially parted ways with ABC last July.

The British-born Goldston named president of ABC News in April 2014.  replacing Ben Sherwood who had been promoted to co-president of Disney/ABC TV at the time. Goldston moved to the top after a two-year stint as svp of content and development.

His achievements at ABC News have been impressive, despite the aforementioned Fedida fiasco. In April 2012, he was the senior executive producer of Good Morning America when after 16 consecutive years as the No. 2 morning show, it finally bypassed NBC’s Today to earn No. 1 in average total viewers. Additionally, five months into his term as news division president, he tapped David Muir to be the anchor of ABC World News Tonight. The newscast has since moved past NBC Nightly News and into first place in all key measurements.

He joined ABC News in 2004 from Britain’s ITV. Following a stint as senior producer of prime time specials and investigations, Goldston was promoted to executive producer of Nightline, a position he held until 2011 until moving over to GMA.

I have some important news to share.  After seven years as the President of ABC News, I’ve decided this is the right moment to move on as this incredible era of news ends and another begins.  My last day will be March 31 to help ensure a smooth transition to a new leader.

It’s a really tough decision. I’ve loved every day of my 17 years at ABC News, but in recent times I’ve always assumed that after this extraordinary election cycle, which we’ve covered at a full sprint for four years, it would be time for a change.  After a great deal of reflection over the last few months, I’m ready for a new adventure.

I will depart knowing ABC News is stronger than it has ever been in its 75 year history – all thanks to all of you, this extraordinary team I’ve been blessed to work alongside every day.

We’ve won all the journalistic prizes there are, from Peabodys and Emmys, to the award for Overall Excellence from the Murrows five times.

We’ve revolutionized our approach to how we report our stories, how we tell them and how we distribute them to the world.

We’ve welcomed The View and FiveThirtyEight into the ABC News family.  We’ve launched ABC News Live and watched its stupendous growth with awe. We added a third hour of GMA that proved so valuable to our audience in the last year as the pandemic swept across the country.

Some people will tell you the ratings don’t matter – never believe them, they do. And thanks to your efforts, we have fought our way to number one across the board, in the mornings, in the evenings, in late night, on Friday nights and overnights, in streaming and social and audio and a lot of other places, too. It’s been spectacular and satisfying to witness.

Most importantly of all, in all my years at ABC News, I’ve been proud to help develop and nurture the next generation of journalists and new leaders.  I’m particularly proud of our coverage this past year, through the pandemic, a long overdue racial reckoning, and an election for the ages.   You’ve inspired me countless times with your resilience and ability to cover every story with distinction, no matter the circumstances.

The last seven years have been a transformative time for the news division.  What hasn’t changed is the dedication of everyone here to deliver straightforward news and an unparalleled excellence for telling stories that matter. There is a great battle still be won – for the facts and the truth, and I know you will work tirelessly to prevail.

The future is very bright indeed.  We have a great partner in Peter, and I’m thankful for his constant support for the news division.  Peter asked me to help with the search over the next two months for a successor, who I’m sure will love this job as much as I do.   I’m also deeply grateful to Bob Iger, who has been a great mentor to me and a fierce advocate for our work always.

This is one of the great jobs in all of journalism.  My only regret is not being able to see our newsrooms filled again with people and energy and endeavor before I go, but I will find ways to say thank you to as many of you as I possibly can in the coming weeks.

I’m excited for what this next chapter holds for me, but for now let me just say it’s been the honor and privilege of a lifetime to lead ABC News.

Walt Disney Company chairman Peter Rice sent out a memo of his own to colleagues. In that note, Rice announced that he is establishing what is being called an Office of the President with James and five seasoned ABC News executives.

Rice says that this office will report to him as it works toward the transition and search for a new president. Derek Medina will handle business operations. GMA senior ep Michael Corn and World News Tonight ep Almin Karamehmedovic will split oversight of breaking news across the day. ABC News executive editor, news content, Wendy Fisher will lead newsgathering teams around the world and ensure ABC News shares information across the editorial groups. And svp, integrated content strategy Marie Nelson will focus the network’s efforts to “strengthen the ABC News brand with multicultural audiences with authentic, relevant and compelling storytelling.” Rice adds that this Office of the President will be a temporary construct installed to allow him to consult with a broader group of leaders and will disband when ABC names a new president of its news division.

Today, James Goldston shared with the ABC News team that he will be stepping down as president at the end of March. After leading the news organization for seven years and guiding it through one of the most tumultuous news cycles in history, James has decided it’s time for a change. You can read his note to ABC News at the end of this email.

I am incredibly grateful to James for his leadership. This past year redefined the 24-hour news cycle, and he led the team with an unrelenting commitment to facts and in-depth, insightful reporting. Maintaining journalistic excellence and integrity amidst a pandemic upheaval, social injustice reckoning, political divide and historic election is an exceptional accomplishment and I commend James for guiding the team through it with distinction. ABC News delivered a perspective on the world’s events that captivated audiences across newscasts and digital sources. Thanks to everyone’s hard work, World News Tonight was the most-watched show on all of television last summer; Good Morning America is No. 1 for the ninth season in a row, and The View won the Daytime Emmy for Outstanding Informative Talk Show and is No. 1 for the first time in its history. Across digital and social platforms, over 132 million people seek out ABC News content every month.

James has been an integral part of the ABC News legacy for 17 years and has always championed journalistic excellence, first as a producer where he revitalized programming, taking Nightline to No. 1 in the ratings and helping GMA break NBC’s infamous 16-year ratings streak, and then later as a leader setting the standard of achievement across the organization. As a leader he is a calming force in the chaos of perpetual news, remaining both thoughtful and strategic while also maintaining his much appreciated wit. A keen eye for talent, James has built an exceptional team of anchors, reporters, producers, crew and employees – both in front of and behind the camera – who tirelessly and passionately pursue truth and insight in reporting the world’s events. Thanks to their uncompromising professionalism and the exceptional standards that James has set, ABC News is in an incredible position of strength.

While James will be with us through March, I am establishing an Office of the President with James and five seasoned ABC News executives. The office will report to me as we work toward the transition and search for a new president. Derek Medina will handle business operations. Michael Corn and Almin Karamehmedovic will split oversight of breaking news across the day. Wendy Fisher will lead newsgathering teams around the world and ensure we share information across the editorial groups. And Marie Nelson will keep us focused on our efforts to strengthen the ABC News brand with multicultural audiences with authentic, relevant and compelling storytelling. The Office of the President will be a temporary construct installed to allow me to consult with a broader group of leaders and will disband when we name a new president.

James has helped build ABC News into one of the most trusted and admired news organizations. We are committed to continuing his hard work and legacy while expanding on the unlimited opportunities the future brings. Although we cannot come together to celebrate James in person, we will make plans to do so as soon as possible. For now, let’s spend the next two months showing James our gratitude and wishing him the very best in his next great challenge.