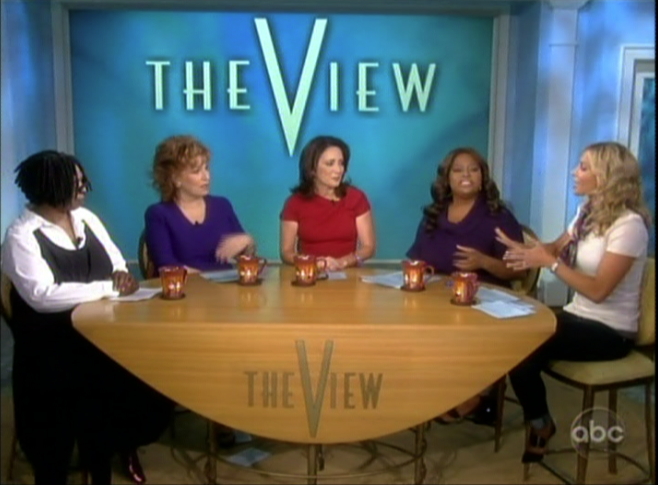 There’s a new book coming out about The View, and it makes the long-running ABC daytime show look pretty bad.

Variety’s New York bureau chief Ramin Setoodeh has been working on Ladies Who Punch: The Explosive Inside Story of The View, for three years, and his behind-the-scenes book about the show will finally be released April 2.

St. Martin’s Press is the publisher.

Setoodeh conducted 150 interviews for the book and sat down with 11 of the show’s most notable cohosts, including 2014 and 2016 interviewes Barbara Walters, who created the show and held 50 percent ownership of it for some time.

Setoodeh told CNN’s Brian Stelter back in December that Elisabeth Hasselbeck and Whoopi Goldberg never agreed to sit down with for the book. “Read it and you’ll see why,” he said at the time.

According to HuffPost’s Yashar Ali, who was able to gain a full copy of the book (others had previously released portions of it), “Walters is portrayed as a leader who understandably held a tight grip on the show, but was also deeply egomaniacal and threatened by women who are more popular (namely Joy Behar and Rosie O’Donnell). The book also alleges Walters actively participated in undermining current and former co-hosts by leaking embarrassing information to the press.”

The book also talks about the power Walters held over the show (she owned half of it, after all) and the fact that its studio was not in ABC’s main New York HQ,  “allowed workplace misconduct and dysfunction to thrive at the program…. And despite the fact that ABC executives were aware of what was happening, the book describes how they repeatedly failed to put a stop to what was going on behind the scenes ― alleging they even participated in stigmatizing mental illness and brought back a host they knew was unquestionably abusive to staff and co-hosts.”

Ali also states that based on Setoodeh’s book, and “there are more than 100 examples of a hostile work environment that were seemingly never looked into….clashes backstage between staff and co-hosts, and between co-hosts and co-hosts, are detailed at great length,.”

Jenny McCarthy is quoted as saying she had a “miserable” year at The View, and that executives tried to make her more like former conservative cohost Hasselbeck.

“They did try to change me. They wanted Elisabeth back, and I wasn’t Elisabeth. I would literally have meetings before the show of them trying to input opinions in me to go against Whoopi. I was going to work crying. I couldn’t be myself. Every day I went home and I was miserable. It really was the most miserable I’ve been on a job in my twenty-five years of show business.”

Then there’s the case of former View ep Bill Geddie, who recently signed on to become Tamron Hall‘s ep for her upcoming ABC daytime show.

Three sources inside the show told HuffPost that Geddie “was known for taking a misogynistic tone on occasion in workplace conversations,” and former cohost Meredith Viera accused Geddie of ageism. Geddie left The View in 2014.