Kantar Media takes a look at the exodus of O’Reilly Factor viewers, and shows that total ad time on the show bottomed out last Friday.

As you can see by the graph, the total ad time on Monday, April 3, two days after the New York Times published its story on O’Reilly and Fox News paying settlements to women who’d accused O’Reilly of harassment, stodd at 15 minutes, 10 seconds. By the end of the week, it was down to 4:40. 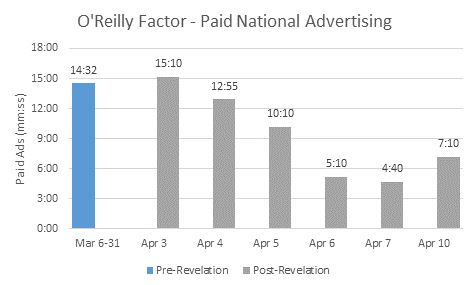 In the four weeks prior to the story, O’Reilly Factor had 33 national spots totaling 14 minutes, 32 seconds. Some of the advertisers who bought ads this past Friday include Athene Financial Products, Australian Dream Pain Reliever, Wax-Rx Ear Cleaner and MyPillow.com, which aired a 1-minute spot that was the entirety of the first commercial break last night.