NEXT:CNN's Brooke Baldwin: 'Why Would You Even Say That Live on National Television?'
PREVIOUS:Fox News's Mike Tobin Detained During St. Louis Protests 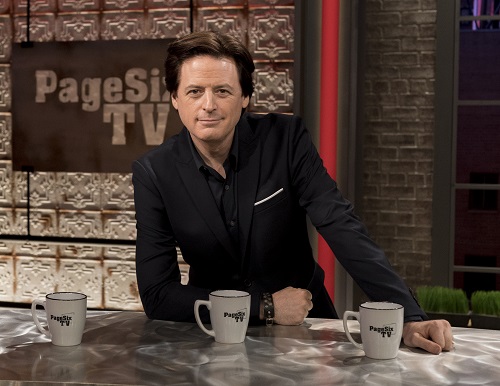 From hosting a VH1 town hall with Paul McCartney to playing a dead guy on CSI, John Fugelsang is about to add another genre to his TV repertoire.

The former veejay and TV news commentator is a co-host of Page Six TV which debuts tonight in syndication on stations across the U.S.

An offshoot of the popular New York Post gossip column, Fugelsang calls the TV version “edgy without being mean.”

TVNewser: What is it about Page Six TV that excites you and makes it different from other entertainment newsmagazines?

Fugelsang: I love the idea of doing a pop culture talk show in New York City with a live studio audience. This is a show that I view as counter programming. I think right now most Americans, regardless of where you stand politically, have outrage fatigue. It’s appealing to me to do a show that I think comes at the right time where family members of different political persuasions after arguing during family dinner can gather around the TV and come together to mock whatever grotesque thing Justin Bieber did this week. I think the healing of America will begin with Page Six!

TVNewser: You have worked in cable news. Why do you think so many Americans have become disenchanted with the news media, and oftentimes find political comedians more trustworthy?

Fugelsang: For a joke to be funny, it has to have some element of truth to it. When you laugh at a joke you laugh because your brain recognizes something true told in a clever way. I think to some extent that means people inherently will trust funny comedians more than they will trust journalists or politicians. I think you get a lot farther with the truth in a joke than just the truth. Taking nothing away from TV journalists, but we’ve entered an era where TV news has become ever more ratings driven and possesses niche-based ideology. People often tune into news to get a point of view they already agree with. In many cases, because it’s so ratings driven, a lot of TV news is designed more to alarm than inform. Now I’m not saying that one should not consume news. I consume news from everywhere, from Amy Goodman to Alex Jones. I try to expose myself to everything. Just as a lot of folks who weren’t into politics got into The Daily Show because it was fun and smart, I think a lot of people who don’t really care about pop culture will enjoy Page Six for the same reason.

TVNewser: Hillary Clinton recently gave an interview where she lamented what she feels is a lack of progressive media outlets to counteract what she deemed “propaganda channels.” You’re an outspoken progressive. Is she right?

Fugelsang: She’s right, but at the same time you have to recognize the landscape we’re in. I was at Current TV for a while. Before that, I did the morning show on CNN with Soledad O’Brien. One morning I caused a “kerfuffle” for the Romney campaign during the “etch-a-sketch” interview, and after that, Joy Behar told me to come over to Current which she felt would be a great outlet post-election. I signed a deal to do a prime time political talk show over there, Viewpoint, and it was really progressive. I found it refreshing to hear points of view I didn’t typically hear. I liked that Current criticized the Democratic Party. I thought that was a very progressive thing to do. But we later found out Mr. Gore and others were developing Current as a property to sell and they made a nice bit of money off of Al Jazeera in the process.

TVNewser: You’ve had a diverse career. How have you been able to reinvent yourself as a host over the years?

Fugelsang: When I first got started, I knew I wasn’t going to be Daniel Day Lewis or George Carlin. I learned pretty early that I wanted to have as diverse of a career as I could, and to try and do as many different things as I could in this life. Starting out, I was offered a lot of money to do some very big time TV shows, but after America’s Funniest Home Videos, I really wanted to try other stuff. I have done sitcom pilots. I was murdered on CSI. I’ve done standup for U.S. troops overseas. I was an artist-in-residence at Dartmouth. I’ve done off-Broadway solo theater. I did a documentary on the American dream for PBS last year. I’m writing a book about Christianity in politics. For me, doing news programming and pop culture goes hand-in-hand. If we think about it, there is no more separation between reality TV and state. A reality TV star has the nuclear codes, and we’re all Kardashians now!

TVNewser: What has been your favorite interview?

Fugelsang: The one with George Harrison when I was at VH1. I was a huge fan of George, and I always admired him not just because I loved his solo career and his guitar playing, but also his spirituality. I had every B-side he ever released, and I knew that if I asked him about the Beatles, he’d be turned off. So I asked him about the stuff I knew he cared about. Things like God, meditation, what happens when you die. I guess he liked how raw and unpolished an interviewer I was, because he ended up staying four hours. At one point, we put a guitar in his hand and he played four songs that he had never played live. That ended up being his final public performance. The day he died, the special I did with him ran on VH1 for 24 hours. It was George Harrison and this 26 year-old kid talking about God. To this day, I have people come up to me in airports and tell me it was the most spiritual thing they had ever seen on TV. It was a blessing for me, and I was proud of the experience because of how I grew and learned from it.