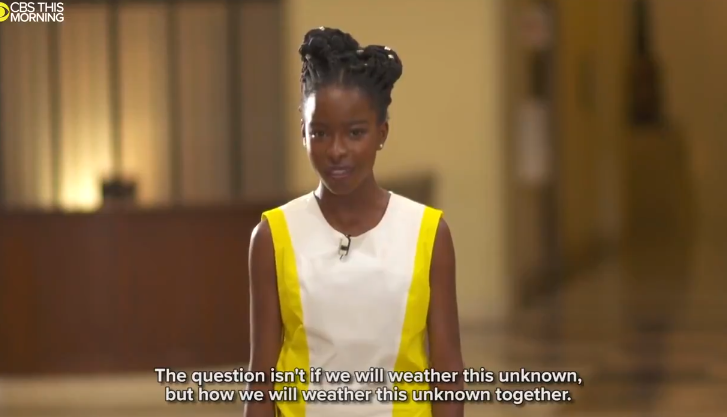 National Youth Poet Laureate Amanda Gorman captured the attention of the country (and the world) with the reading of her original composition The Hill We Climb at Wednesday’s 59th presidential inauguration ceremony. But what you might know is that 22-year-old has previously commissioned five poems for CBS This Morning since 2018.

In June 2019, the show asked the artist to compose a poem in honor of Independence Day. She was joined by the Boston Pops for an original collaboration.

WATCH: In honor of #IndependenceDay this week, we asked the Inaugural Youth Poet Laureate of the US, @AmandaSCGorman, to write a poem & @TheBostonPops to accompany her for an original collaboration.

Here’s Gorman this past spring performing The Miracle of Morning. She’s even wearing clothes in the morning show’s signature yellow and white color scheme during her performance.

Did you know that @TheAmandaGorman has performed five commissioned poems for @CBSThisMorning?

Back in June, Gorman performed a poem for CBS This Morning about the Black Lives Matter movement:

As the U.S. struggles with its racial inequities and injustices, our artists are doing the same. America’s inaugural Youth Poet Laureate is one of them.

@AmandaSCGorman captured this historic moment in an original poem, performed at the Cross Colours exhibit at @CAAMinLA. pic.twitter.com/h7DKn5bUmu

CBS This Morning co-host Anthony Mason spoke with Gorman on Tuesday in advance of her historic inauguration day performance.

At 22, @TheAmandaGorman will become the youngest known inaugural poet when she performs at the 59th Presidential #Inauguration. Today, she will deliver her original composition, “The Hill We Climb.”@AnthonyMasonCBS spoke to her ahead of her big moment. #InaugurationDay pic.twitter.com/hNT4JIhiCt