NEXT:Jake Tapper on Trump's Speech: 'You Saw This Evening and the Last 4 Nights the View of the World From Planet Trump'
PREVIOUS:Aug. 23 Sunday Show Ratings: Meet the Press Edges Face the Nation in Total Viewers, Dominates Among Adults 25-54 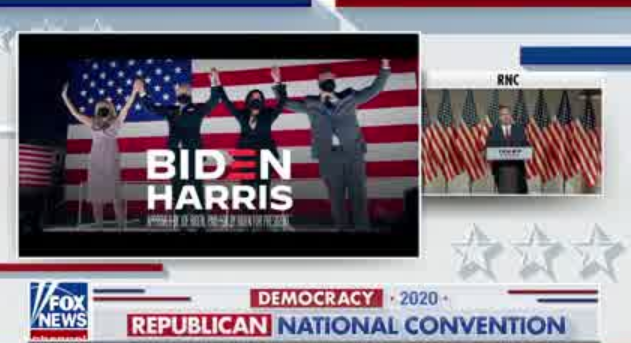 The two-minute pro-Biden spot, titled “Keep Up,” aired on Fox News from 8:55-8:57 p.m. ET, just before Tucker Carlson signed off and minutes before Sean Hannity took over. As the image to the right shows, the ad was shown in a split screen, seemingly drowning out a chunk of speech being given by Trump’s social media czar Dan Scavino.

Buying two minutes of time on Tucker Carlson Tonight—a show which has lost more than its fair share of advertisers over the years for reasons we’ve documented ad nauseum on this site—is a bit of an interesting move by the Biden campaign. It’s technically spending money on a show and a host Democrates collectively loathe.

The spot aired on NBC from 9:57-9:59 p.m. ET, right after the conclusion of Law and Order and before the start of NBC’s studio coverage, anchored by Lester Holt and Savannah Guthrie.

The ad appeared on ABC from 9:53-9:56 ET. It was the second spot to air after the conclusion of the game show To Tell the Truth and before ABC’s studio coverage anchored by George Stephanopoulos, David Muir and Linsey Davis.

The spot aired on CBS from 9:53-9:55 p.m. ET, right after the conclusion of the unscripted competition show Love Island.