NEXT:Scoreboard: Thursday, Nov. 8
PREVIOUS:CNN Could Sue the White House Over the Ban of Jim Acosta

Anchored by Bret Baier and Martha MacCallum, Fox News was the most-watched network during midterm election coverage last Tuesday, but there was some controversy hanging over the network that night, in light of Sean Hannity‘s on-stage appearance at the President’s final pre-midterms campaign rally in Missouri the previous night.

This was supposed to be Fox News’s star turn — the big day for its journalists. Instead, the previous 24 hours had exposed the spreading fissures at Fox News, which is in the midst of its own version of a civil war, pitting its news anchors against its big-name pundits, who are avid promoters of President Trump. Baier, who has been at Fox for 21 years, says he approaches every day “with horse blinders on.”

“I don’t spend a lot of time analyzing what the opinion shows are doing,” he adds, but it was impossible to ignore Sean Hannity’s guest appearance at President Trump’s final midterm-elections rally in Missouri.

So will Fox News survive as “a house united?” Ellison asks.

After Hannity’s onstage appearance with Trump, Baier said that “there was a lot of reaction inside the company,” and that he, MacCallum, Brit Hume and Chris Wallace addressed it at a pre-scheduled lunch with Fox News chief executive Suzanne Scott and Fox News President Jay Wallace the day of the election.

“It was a big part of the discussion,” Baier said. Wallace and Scott told them the Murdochs had been personally involved in the statement that Fox News put out that morning expressing disapproval of Hannity’s action. “We felt confident that they understood the seriousness of the moment, and that the news side needed to make sure [management] had our backs. . . . I do something different than Sean does, but when an event like this happens, it needs to be clear cut.

Rupert and Lachlan Murdoch have deemed Hannity’s actions on Monday night “unacceptable,” but it appears as though no further action has been taken against the face of the network, aside from a public statement from the network saying he had created “an unfortunate distraction,” and Hannity tweeting that he did not mean to include his Fox News journalist colleagues in the “fake news media” remark he made at the rally.

Disappointed or not, the Murdochs and Fox News are at the mercy of Trump and Hannity, at least for now. “They’re willing to support Sean in the short term but Sean’s key to survival now is the connection to the Trump base and voter,” said a Trump administration official close to the network. Lachlan Murdoch recently said that he wasn’t embarrassed by what is on Fox News and that more people watch the channel’s news coverage than its opinion programming.

This isn’t the first time Hannity has been scheduled to appear at a campaign rally. There was a 2010 rally in Cincinnati for a tea party candidate, but the late Fox News chief Roger Ailes shot down the appearance.

This time, with the Missouri rally, there was no one to call him back before it was too late. “Hannity is really pushing the envelope,” said a former Fox executive. “He’s daring people to try to stop him.” 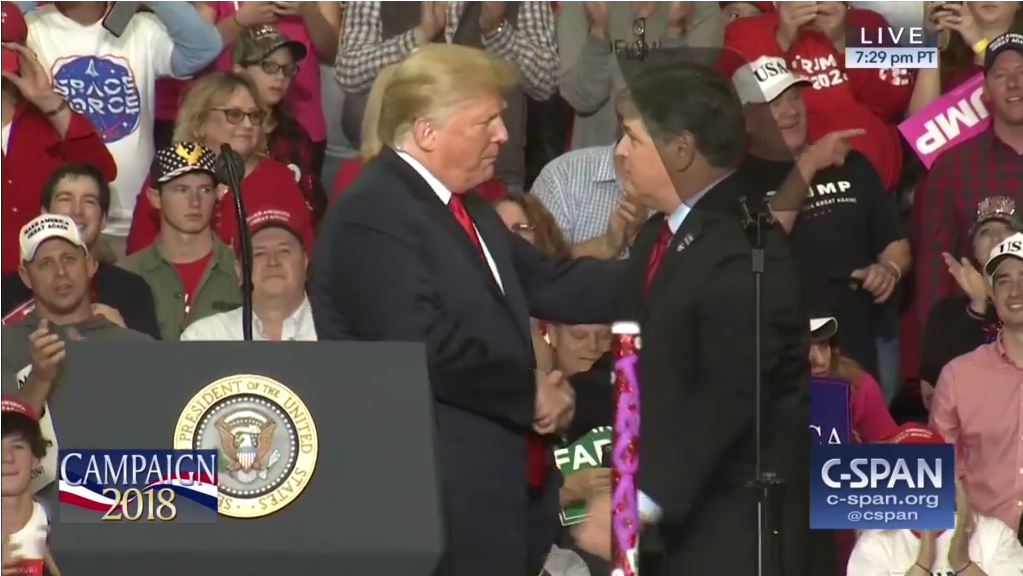