NEXT:How Many Viewers Do You Think Will Tune In to Super Bowl LIII on CBS?
PREVIOUS:ESPN Anchor Adnan Virk Was Fired by the Network on Friday 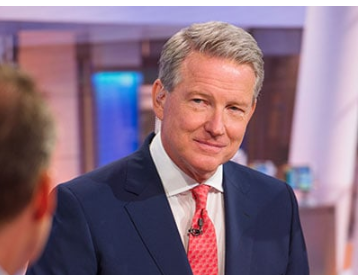 Adweek: What were you doing 15 years ago?
Westin: I was president of ABC News, and we were covering the ongoing war in Iraq, which had started 9 or 10 months earlier, and we were getting ready for an off-year election later that year. Iraq was still a very big issue for us then.

Covering the 2008 presidential election during that period was my favorite. It was a wide-opening race, because George W. Bush was term-limited, and in the end it came down to John McCain and Barack Obama, two very different sorts of candidates. As part of that, ABC News hosted a debate during the New Hampshire primaries where we had all the Republican candidates onstage and then immediately had all the Democratic candidates come on stage. So we had all of them together. In fact, there’s a photo I have of all the candidates from the Democrats and the Republicans. I’m quite confident it’s the only time it’s been done. It’s funny, thinking back on that now, we actually paired with Facebook all the way back in 2008, to stream. It was one of the first things Facebook did in politics, I believe. So that was probably my favorite experience, was the coverage of that election. Straight from the primaries in New Hampshire all the way through to election night.

First of all, it’s not TV news, it’s video news now. There’s an awful lot we don’t get over a TV set. And that may really say what the biggest change is, right there. Back in those days, we started a streaming service in 2004, believe it or not. The year you were created, we started our first streaming service. Peter Jennings was a big advocate, because we wanted to cover the 2004 presidential political conventions gavel to gavel, and knew that we couldn’t do it on the full network. And so he came to me and said, why don’t we try this online? And we launched it at the Democratic Convention up in Boston. Since then, obviously, streaming has really come to the fore. Cable was already there, although that’s even been expanded out beyond just Fox and CNN and MSNBC. And people get their video news in all sorts of ways, on all sorts of devices, 24 hours a day. There’s a  lot more of it, which means that no single source has the reach that it did. And there’s a lot more competition. People have needed to adjust to that, and they’ve adjusted in part by seeking their own niches to some extent. And that’s in part in news through taking points of view. There’s much more opinion expressed in video news today than there was in 2003, 2004, by a long shot. And the economics have changed fundamentally. The audience is smaller and if you’re advertiser-supported, the revenue is less, and as a result, people have had to scale back on resources.

My toughest professional challenge is also one of the things ironically that I’m most proud of, although that might ring hollow to people. At the end of my tenure, I concluded, and the company certainly agreed with it—there was constant cost pressure throughout my time there—that we needed to get in front of the change in the business model. That if we continued to lose ratings at the pace we were, that ABC News itself would be in jeopardy. And so I, with a very small group of people that worked for me, put together a plan in secret to cut 25 percent of the cost of ABC News, which inevitably means personnel. And it was brutal and painful. I’m pleased to say that the corporation agreed to give very generous buyouts, and so in the end, of the people we were having to let go, almost all volunteered because they got attractive packages. But it did it because I knew that was essential for the survival and the flourishing of ABC News. And we did it with a view that we shouldn’t impose our problems on the viewer, so that the viewer should never even notice that it happened. And there were people at the time who said that’s impossible, people will immediately see the difference. And I would challenge any of those to go back and look at what happened before and what happened and say, that’s because they cut costs. But it was absolutely brutal, but I am proud of the job we did, because we looked the problem in the eye, and we dealt with it straight up, and we didn’t get dragged into it kicking and screaming.

I was president of ABC News for just under 14 years, and I spent a lot of time in control rooms and on sets, dealing with people who were on the air. I thought I had a good sense of what it was like, and the moment that I stepped in front of a camera as an anchor, I realized I had no idea. If I had to do it all over again, I would have assigned myself to do the overnight news, something that was fairly harmless, for a week or two at the very beginning of my tenure. And I would have been a better news president if I had done that, because I would have understood some of the pressures and difficulties placed on those people who are in front of the camera.

I learned as much from my anchors as I did from anyone. For example, one of the things that Peter Jennings taught me, that I fear we are losing to some extent, is that the story is not about us. Peter would say, ‘You turn the camera over there, not on me, because that’s where the story is.’ He had a very strong sense of that.

Which competitors do you admire?

In terms of Video news, NBC News tended to be No. 1, we took over the No. 1 slot on the evening news for a year or two, but they tended to be number one, and I respected their competitive spirit. They were a very different shop from what we were. And their mission was different from our mission, but I certainly respected what they did. And there were parts of what everyone did that I respected. But I would say none that I sought to emulate.