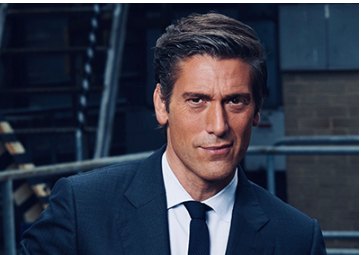 Adweek: What were you doing 15 years ago (in January 2004)?
Muir: I was in my first year at ABC News anchoring the overnights and filing pieces for Good Morning America and World News Tonight. I will never forget the special report I anchored that first year with Peter Jennings.  He was in a Baghdad courtroom with Saddam Hussein.  Every day I was humbled by the journalists in this building. Peter Jennings, Diane Sawyer, Charlie Gibson and Barbara Walters. We’ve gone through the archives and chose images of them to line the hallway to the newsroom.  It’s a helpful reminder everyday of how lucky we all are to be here.

What’s your favorite professional moment of the past 15 years?
Our [2015] town hall with Pope Francis remains one of the most challenging and rewarding moments of these past 15 years. Part of our pitch to the Vatican was my willingness to conduct the entire town hall in Spanish, and they said yes. But then I had to conduct the town hall in Spanish. I’d be lying if I didn’t say it was equal parts historic and terrifying.

What is the biggest way that TV news has changed over the past 15 years?
I always loved Peter’s broadcast.  It seemed to me Peter was having a conversation with America every night and I recognize now the great privilege it is to have that same conversation, though I think we are in a far more accessible time.   Viewers can reach out via social media in real time with their own thoughts, opinions, story ideas.   And they do every night.  I think in many ways social media can be a distraction when it turns ugly or when it’s not based in fact, which is often.   But in one very important way, we can use it to inform with immediacy and it allows viewers to react and connect in ways they couldn’t before.

Who have you learned the most from in your career?
Honestly, I’ve learned so much and I’m still learning. I remember the first time sitting beside Diane Sawyer on the GMA set, the first phone call from Peter Jennings in the field, and there was a moment with Charlie Gibson while I was covering the Israeli war with Hezbollah, and the Avid [editing system] crashed right before air. Charlie got into my ear right before air as I was standing near the border ready to go live and told me we were just going to have a conversation instead. It was his calm, fatherly demeanor that allowed me to take a deep breath and ignore the fact [that] the lead piece had crashed in edit. It made for better television. If you take a quiet, deep breath before most high-pressure moments, it most often helps.

Which of your competitiors do you admire?
I admire them all.  I recognize every night when we throw out the lead piece – or nearly the entire first block – and scramble based on this endless cycle of breaking news — that we’re hardly the only ones doing this.  It is one of the challenges of this time we’re in.  To move quickly.  To digest quickly.  And to help folks at home break through the noise.  There’s always noise, and the true story is often far from the noise.  We’re all doing it.  And I know our team is trying its best.