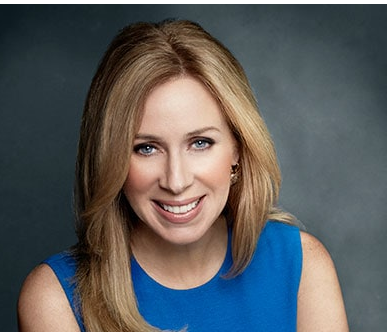 Adweek: What were you doing 15 years ago (in January 2004)?
Quick: In January 2004, I was a correspondent at CNBC. I had been covering Wall Street, and had bounced around and was doing general news and all kinds of stuff. And that’s just about the time I started appearing on Bullseye every night. I was still a correspondent and doing my regular stuff during the day, but then Bullseye was a prime time show we launched in the evenings. Dylan Ratigan was the host, and I started sitting on set every night with him. So it was me first getting my chops doing live interviews on television. It was a pretty crazy time, there was a lot of stuff going on.

In April of 2004, we did the first national television interview with Mark Zuckerberg from Facebook, and at that point, it was still The Facebook. Because he had just founded the whole thing in February of 2004, we had him on in April, so less than three months later. And at that point, I asked him the question, So what is The Facebook exactly? Because nobody knew what it was at that point. He was still living in his college dormroom at Harvard, if you want to think about how far they’ve come. Now more than a $350 billion company. It was before Sean Parker entered the scene. He was still a student. It was before they got their first investment from venture capitalist Peter Thiel. This was so early on that I remember at the time, I asked him, “What’s your goal?” And he was saying, “Well, maybe eventually we’ll have 100,000 people sign up, if we’re really good and really lucky.” It doesn’t seem like that long ago, but so much has happened since then.

I would say my favorite experience was flying to China with Warren Buffett. I didn’t really know him at that point. I called him up out of the blue, because I heard he was going to China, and just asked if I could come along. And I think he was so taken aback!, and he’s so nice and so midwestern… I guess he didn’t think of a quick-enough way to say “no” politely, so he said, “sure, I guess so.” So I ended up flying to China with he and a bunch of the guys from Nebraska Furniture Mart, and it’s 12 hours on a little plane. At first, when he said yes, I was like, “Oh, fantastic!” And then I was like, “Oh my gosh, what am I going to talk to him about for 12 hours?” So just prepping for that. And he was so nice, and we ended up talking for almost 12 hours straight. SO that was probably my favorite professional moment. And then all the coverage we had coming out of that. But that was before I really knew him. And getting to know him on that plane is probably the most amazing thing that I’ve gotten to do professionally.

I would have to go back to the changes we tracked with Mark Zuckerberg and Facebook since then, and really social media at large. That is so different. When I think about how our jobs have changed and how there’s so much more immediacy … 15 years ago, cable news was the incessant yapping, pushing the story forward. And I remember, people used to complain about the 24-hour news cycle, because cable news meant that you always had to rush things out and get things out there before you were ready to check them. But now we look like the old slow movers, relative to anyone posting anything on Twitter or Instagram or anything and beyond.

That has been the most drastic development I can think of. Just this instantaneousness, where every single person on the planet has their own platform to get it out there. The need to be fast, but also the need to be right, and accurate, and to check your sourcing and going with it. I used to work at the Wall Street Journal before, so going from print to cable news was this massive jump, light-speed, it seemed like at the time. And going from that to this has been even a faster and more pressure cooker sort of transition. So watching the change in journalism, the way we find our sources, the way we check and verify, but just how fast we can get news on the air, because you have to. That has been the huge challenge, in making sure that you are still credible and accurate, and double-checking and triple-checking everything. But still competing with people who can put things on instantaneously, with no fact-checking, no editors, no process through the whole thing. I remember, I used the read the papers every morning, and 15 years ago I’d still be reading the papers before you go on. I still do that, but I’m not reading the papers in a physical presence as much. We have them, but I’m reading everything electronically before it  ever gets printed and put out. The printing press is such a slow process relative to what we need. It’s how you are gathering information and how you are learning. They used to say a 24-hour news cycle, but it’s nothing like what you see today.

None of us are ever doing one thing at a time. I’m watching my Twitter feed, and the newswires and the Drudge Report, and I have 15 other sources that I’m watching all through the course of while I’m on television. You can never afford to take your eye off the ball.

That’s a long list of people. I can look at a lot of people. My first boss in the real world, Karen Miller Concero, taught me to do more than you were given every day. She’d give me opportunities to go and be a reporter and fill-in for people. I was working the Sunday to Thursday shift, and she said, why don’t you come in on Fridays and do other stuff? So I did. I freelanced other things at the Journal and would fill in for reporters who were out. I was a news editor at that point, for the overseas copy desk. So coming in and acting as a reporter for free, she helped open a lot of doors to me. And that in turn opened doors along the way. Dennis Neal was one of my first editors, when I was a reporter for the print Journal, and he taught me,  follow the story, how to tell a narrative.

Then coming here to CNBC, I’ve been sitting next to [Squawk Box co-anchor) Joe Kernen for the last 14 years, and Joe has taught me so much about taking a breath and taking a step back and realizing, okay, slow down, thought process, what does this mean. Be a little more analytical about things and try and tie it all together. He teaches me all the time to not take ourselves so seriously and try to think the way the viewer would about these things.

Which of your competitiors do you admire?

I admire a lot of them. I feel like we are driven my our competitors all the time, whether that be from the other networks, whether that be from the newspapers, whether that be from some of these new breeds, like an Axios or a Politico. I have to admire what Politico and Axios have both done in terms of getting out there fast in the morning, being so deeply sourced, and adapting to the new media world. I think they’ve done it really, really well. And not just copied the old tricks and the old way of getting media out there, but inventing and adapting. So I really hand it to them. They’re not entirely in the same business that we are, but it’s the same thing. When you have [Axios co-founder] Mike Allen on and you’re hearing what these guys are doing, talking all night, sourcing multiple sources off each other, and then getting it out in a way that audiences want to read it and see it, I’m really impressed by that. [Politico chief economic correspondent, Morning Money author] Ben White does it at Politico, Mike Allen at Axios. Just this all-encompassing, different way of taking all the news that’s out there and compiling it and then giving you a smarter read. Sometimes they get criticized for being the short-form of journalism, but I think it’s really useful. And it’s what audiences want and it’s what people want. That’s why they’ve been so successful at it.

Trying to figure out how to make the transition from print to television. I almost quit in the first couple months I was here, a little over 15 years ago, because I wasn’t sure I could handle it all. It’s a visual medium, so you have to figure out how to present the news differently. Coming in early and going through makeup, and doing your sourcing and the rest of it, that’s a pretty tough transition. Now it seems easy, but at the time, I almost quit.