NEXT:NBCUniversal News Group Chairman Cesar Conde Speaks About Present and Future of NBC News, Including Rachel Maddow's Role at the Network
PREVIOUS:Tuesday, Oct. 12 Scoreboard: Tucker Carlson Finishes No. 1 Across the Board 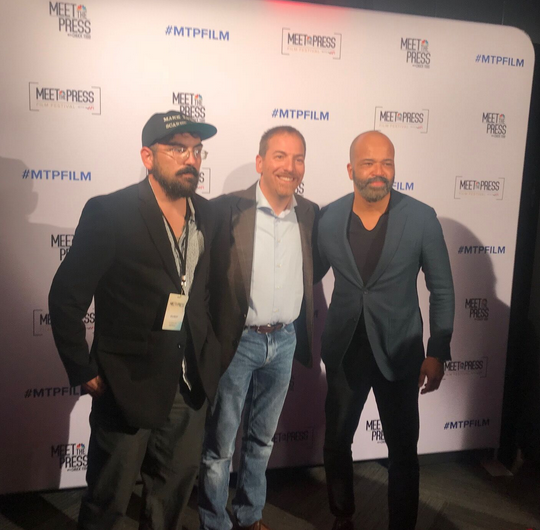 Short documentary films from the U.S., Canada, Hong Kong and Israel will be featured at the 5th annual Meet the Press Film Festival on Thursday, Nov. 11 in Los Angeles.

The event will take place as part of AFI Fest with in-person screenings in LA, along with virtual screenings online.

This year’s festival, which once again will be presented in collaboration with the American Film Institute, will feature 15 short documentary films from the four aforementioned countries that spotlight pressing issues facing modern society, ranging from racial and gender equality, immigration and democracy, to criminal justice and police reform among others.

Each screening will include a panel discussion with the filmmaker(s), moderated by NBC News correspondents and anchors, including MTP moderator Chuck Todd, as well as colleagues Andrea Mitchell, Jacob Soboroff, Shaq Brewster, Ali Vitali and Morgan Radford. The conversations following each program will be for both virtual and in-person audiences.

During its inaugural year, the MTP Film Festival showcased 16 short documentaries exploring a variety of issues, and three of the films were nominated for Oscars. Last year’s festival featured nearly two-dozen short-length documentaries focusing on issues like immigration, voting rights and gun control, just weeks before the midterms. They hailed from HBO, Netflix, The New York Times and filmmakers from across the country.

Here’s a description of what attendees can expect to see at the 5th annual festival, and the first one held in Hollywood:

PROGRAM ONE: WHERE I BELONG
Home can be a place, a community, or a memory. The search for belonging takes many forms.
• Golden Age Karate
USA, 5 min
Directed by Sindha Agha
Teen karate pro Jeff Wall teaches senior citizens self-defense at a local nursing home, giving them the tools to feel in control, connected and cared for.
• Coded: The Hidden Love Of J.C. Leyendecker
USA, 29 min
Directed by: Ryan White
The coded advertisements of legendary early-20th century gay illustrator J.C. Leyendecker quietly, but directly, acknowledged a community that was forced to live in the closet.
• The Train Station
Canada, 2 min
Directed by Lyana Patrick
In this beautifully animated documentary short, filmmaker Lyana Patrick narrates her family’s powerful story of love and survival at Lejac Indian Residential School.
• Lead Me Home
USA, 38 min
Directed by Pedro Kos and Jon Shenk
A short presenting the epidemic of homelessness in America with candid testimonials from the unhoused. A poetic portrait of our culture’s fraying edges and the people who inhabit them.
PROGRAM TWO: PROMISES
America is a land of promises, but some promises are traps.
• The Facility
USA, 27 min
Directed by Seth Freed Wessler
A group of immigrants, detained inside an infamous American detention center as the pandemic spreads, organize in protest to demand protections and their release.
• The Interview
USA, 20 min
Directed by Jonathan Miller, Zachary Russo
The film forces viewers to confront their own feelings about justice and mercy, while revealing the heavy toll our current system takes on incarcerated people and their families.
• Bree Wayy: Promise Witness Remembrance
USA, 29 min
Directed by Dawn Porter
A film by award-winning director and 2021 AFI DOCS Charles Guggenheim Symposium honoree Dawn Porter that looks at how the art world responded to the death of Breonna Taylor by using art not only as a form of protest but as a space to heal.
PROGRAM THREE: DEMOCRACY … ON THE LINE
Around the world, defending democracy takes work.
• Party Line
USA, 7 min
Directed by Lydia Cornett
At the early voting line in Ohio’s most populous county, civic duty is a public performance.
• Red Taxi
USA/Hong Kong, 14 min
Directed by Anonymous
As protests unfold in Hong Kong, RED TAXI shows a city in upheaval through the eyes of those who must traverse the streets day and night to make a living.
• Takeover
USA, 38 min
Directed by Emma Francis-Snyder
An exploration of July 14, 1970, when members of the Young Lords Party stormed the Lincoln Hospital in South Bronx, making their cries for decent healthcare heard by the world.
PROGRAM FOUR: GHOSTS & LEGACIES
America’s dark racial past isn’t in the past.
• Meltdown In Dixie
USA, 40 min
Directed by Emily Harrold
A film exploring the broader role of Confederate symbolism in the 21st century and the lingering racial oppression which these symbols help maintain.
• Lynching Postcards: ‘Token of a Great Day’
USA, 16 min
Directed by Christine Turner
From 1880–1968 over 4,000 African Americans were lynched at the hands of white mobs. These lynchings were commemorated through souvenir postcards that would ultimately be subverted by Black activists to expose racist violence in the U.S.
• They Won’t Call It Murder
USA, 24 min
Directed by Melissa Gira Grant and Ingrid Raphael
Mothers, sisters and grandmothers of those killed by Columbus police, seeking justice in a community bound together by grief and a system that refuses to call these killings murder.
PROGRAM FIVE: AFTER THE WAR
The trauma of war leaves room for new understanding.
• Camp Confidential: America’s Secret Nazis
USA, 34 min
Directed by Daniel Sivan and Mor Loushy
During WWII, a group of young Jewish refugees are sent to a secret POW camp near Washington, DC, and they soon discover that the prisoners are Hitler’s top scientists.
• Mission: Hebron
Israel, 24 min
Directed by Rona Segal
Israeli soldiers are recruited at age 18 and, only months later, are already overseeing Palestinian civil life. Former soldiers describe their time in Hebron, the most troubled city in the West Bank.