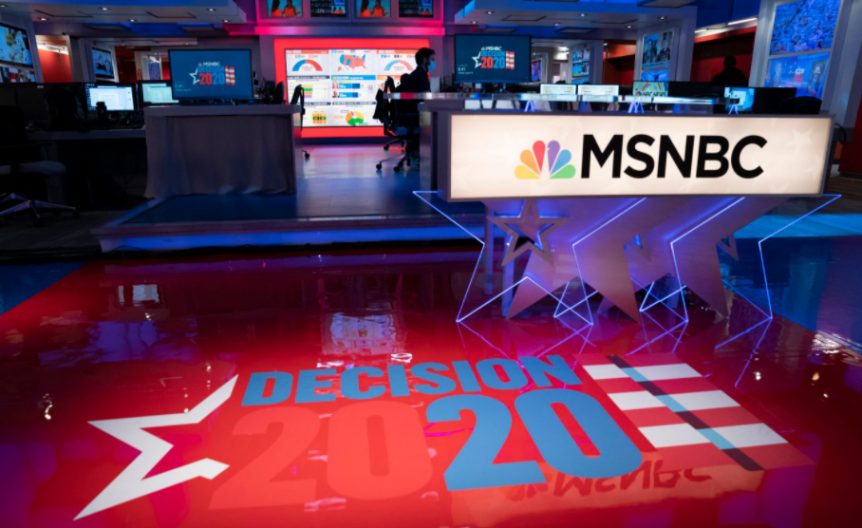 MSNBC has been on a historic run during the Trump years.

It has posted triple digit percent viewership growth since 2015, and has gone from a top 30 basic cable network during the Obama years, to the second-most-watched cable network over the past few years, including 2020.

It remains to be seen whether the left-leaning cable newser can maintain this significant audience during what should be a less chaotic four years, but 2020 was a great year for the network, capped off by solid ratings for its wall-to-wall coverage of the coronavirus pandemic, and a historic presidential election.

The fact that there’s a higher percentage of year-over-year growth among adults 25-54 than among total viewers makes sense considering younger viewers are more likely to tune into cable news during an election year than in an off year. The year 2020 was of course an election year, whereas 2019 was not.

MSNBC delivered less viewership growth than Fox News and CNN relative to 2019, but the more growth relative to 2016. As expected, there’s more growth among adults 25-54 than total viewers from 2019 across cable news for the reasons explained above.

However, compared to the most recent presidential election year (2016), MSNBC saw far more growth among older audiences (total viewers) than among the key A25-54 demo. That’s partly due to the fact that the average age of the linear TV viewer has dramatically increased over the past 4 years, but MSNBC’s average age has a;sp increased at a more rapid rate than its competitors’.

Below are the final 2020 Nielsen live+same-day numbers:

MSNBC ended the year on a high note. Morning Joe, The 11th Hour with Brian Williams and The Rachel Maddow Show, three of the network’s signature shows during the Trump administration, set December audience records and beat their Fox News time slot competition  in December – the 1st time since 2001.

Since the election, MSNBC is No. 1 on cable in total viewers (exclusively on weekdays. Fox News pulls ahead if one throws weekends into the mix).  Several shows have finished at No. 1 in total viewers during this period including: Deadline: White House at 4 p.m., The Beat with Ari Melber at 6 p.m, The ReidOut at 7 p.m. for the last 5 weeks and The Last Word with Lawrence O’Donnell at 10 p.m. for the last 3 weeks.

“Morning Joe,” “The 11th Hour with Brian Williams” and “The Rachel Maddow Show” Draw Historic Viewership in 2020 and Finish #1 Over FOX News in December – the 1st Time Since 2001

“Deadline: White House” at 4pm, “The Beat with Ari Melber” at 6pm and “The ReidOut” at 7pm Finish #1 for the Last 5 Weeks Over FOX News

“The Rachel Maddow Show” ends the year with a #1 finish in December topping FOX News for the 1st time since February 2019. “Maddow” drew 3.6M total viewers in December (vs. FOX News’ “Hannity” with 3.2M and CNN’s “Cuomo Primetime” with 2.3M). In 2020, “Maddow” capped the year with a record rating of 3.4M, the highest rating ever for an MSNBC regularly scheduled show. “Maddow” has beaten CNN for 11 straight years. Compared to 2019, “Maddow” increased viewership by +16%. “Maddow” also delivered its best audience performance in A25-54 since 2018 with an average 553K viewers – a +13% increase compared to 2019. In July, “Maddow” delivered its highest-rated show ever. The July 16 episode featuring Mary Trump’s 1st cable news interview scored the show’s highest-rated hour in history and was the highest-rated regularly scheduled show ever on MSNBC with 5.7M viewers, as well as the #1 show in prime for the day across all cable and broadcast.

Since the election (11/8), MSNBC is #1 in all of cable television for M-F 6am-2am and M-F 6am-6am. Several shows have finished at #1 in total viewers during this period including: “Deadline: White House” at 4pm, “The Beat with Ari Melber” at 6pm, “The ReidOut” at 7pm for the last 5 weeks and “The Last Word with Lawrence O’Donnell” at 10pm for the last 3 weeks.

MSNBC launched brand new shows that made history this year, including “The ReidOut,” “Velshi,” “American Voices with Alicia Menendez,” “The Week with Joshua Johnson,” “Way Too Early with Kasie Hunt” and most recently, “The Cross Connection” and “The Sunday Show with Jonathan Capehart”, all offering more diverse perspectives and reaching more audiences than ever before. The premiere of “The ReidOut” on July 20 hosted by Joy Reid drew a record 2.6M total viewers, topping FOX News (2.1M) and CNN (1.3M).

Audiences flocked to MSNBC for special Decision 2020 coverage this year. MSNBC’s election week coverage (11/2-11/8) was the highest-rated week in MSNBC’s 25-year-history, delivering a record shattering 3M total viewer (M-Su 6am-2am), according to Nielsen. In A25-54, election week scored 743K viewers, the highest-rated week since 3/17/03 (the week the Iraq War started). On Saturday (11/7), the speeches of President-elect Joe Biden and Vice President-elect Kamala Harris drew a record 9M total viewers and 2.5M A25-54 viewers on MSNBC from 8:28pm-9pm, marking the highest-rated program in MSNBC’s history. MSNBC’s special Decision 2020 coverage on Saturday (11/7) topped FOX News every hour from 8am-3am in total viewers and A25-54, including a special edition of “Morning Joe” from 8am-1pm. This was the highest-rated Saturday in MSNBC history and the 2nd highest-rated day ever behind Election Day 11/3/20.

MSNBC provided real-time coverage, fact-checks and analysis of major Decision 2020 moments including both the 2020 Democratic National Convention and Republican Convention. MSNBC was the most-watched network across all of television in total viewers for the DNC (Aug. 17-Aug. 20), sweeping each night during prime (8pm-11pm), delivering the network’s highest-rated week ever in prime and unseating CNN as the highest-rated network during the Democratic National Convention. MSNBC drew a record 4.9M average viewers during the four nights of coverage in prime dominating all competitors by at least +700K viewers (vs. FOX News’ 3.6M, CNN’s 4.2M). Where all networks competed head-to-head (10-11:15pm), MSNBC’s 5.9M delivery among total viewers led ABC News’ 2.6M, CBS News’ 2.0M as well as CNN 5.2M and Fox News 2.4M.

MSNBC digital reach has grown in 2020 increasing viewership by +41% compared to 2019, according to Comscore Media Metrix. MSNBC digital video viewership and engagement has spiked in 2020 with an average of 167M monthly video views marking the strongest year on record and up +47% compared to 2019 in full. MSNBC’s video views within the political news competitive set ranks at #1 throughout 2020 topping CNN Politics by +113% and FOX News Politics by +452% on average. Viewers of the MSNBC political news set watch for an average 45 minutes per viewer, nearly 3x more than CNN (16 minutes) and more than 2.5x that of FOX News (18 minutes).

NOTE: Year-end ratings are based on Nielsen most current data day for 12/30/2019-12/16/2020. Individual show data for the month represents regular programming only, excluding specials and breaking news