Streaming consumption continues to break records, claiming 35% of total TV usage in August 2022, while audience engagement across platforms is starting to vary depending on where the big-name content is, according to Nielsen’s latest update of The Gauge, a monthly look at how consumers watch content across top TV platforms.

Streaming was also up 22.6% year-over-year in August, while monthly usage was largely flat from July.

When it comes to the streamers, audiences follow the content. Nearly 18 billion minutes of Stranger Things on Netflix were watched in July, but that response diminished in August, resulting in a 6.5% decrease in usage and a 0.5-point decline in Netfix’s proportion of TV viewing. In contrast, HBO’s eagerly awaited House of The Dragon premiere drove a 13.7% increase in HBO Max usage, culminating in a record 1.2% of TV time.

Meanwhile, YouTube increased its share of the streaming market by +2.8%, tying Netflix for 7.6% of all TV viewing for the first time.

Linear streaming, such as include Sling TV, Charter/Spectrum, Hulu Live, and YouTubeTV, accounting for 4.2% of total television usage in August.

Fewer people watched TV overall in August, which is typical as summer comes to an end. However, one category which did see volume growth was broadcast television, up +1.6% (+.05 share points) , its first month without a decline since January. Broadcast TV’s increase was driven by a +3% rise in sports content consumption, including the NFL preseason, college football and the MLB Field of Dreams game, as well an +11% increase in the General Variety category.

And despite being down -0.4% in usage from July, cable TV did see a gain of +.01 share points in August, up to 34.5% of all TV viewing in August. The slight gain was in cable news viewing of 13% and sports viewing of 27.4%, with the NFL preseason games on ESPN and the NFL Network and the NASCAR Cup Series on USA Network leading the way.

While broadcast and cable viewing in August was mostly positive relative to July,  year-over-year data shows losses in viewership of -10.9% and -9.4%, respectively. 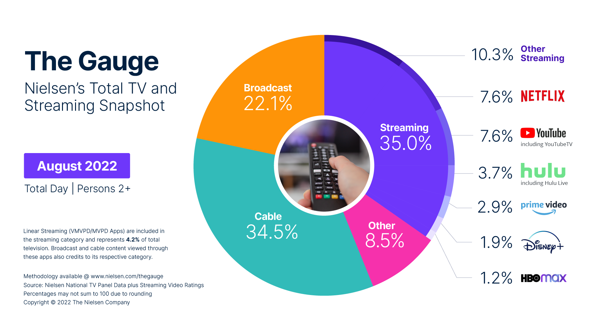