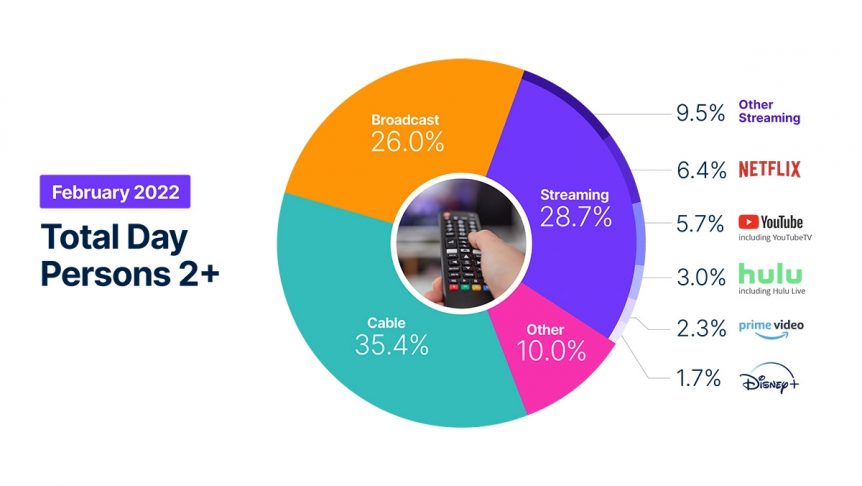 Despite the Super Bowl, Winter Olympics, and the heightened demand for news of Russia’s invasion of Ukraine late in the month, February’s TV viewership trailed January’s per usual, according to Nielsen’s latest update of The Gauge, its monthly look at how consumers are watching content across top TV platforms.

Brian Fuhrer, svp of product strategy and thought leadership at Nielsen, said in a posted video that since January is always the heaviest media consumption month, with high profile sporting events, the release of heavily-promoted content on broadcast and viewers watching more television as they stay inside to escape the cold. Therefore, this means there will usually be a decline in viewership month-over-month, and this year was no exception, he said.

January 2022 was a five-week month, including the peak usage week directly after Christmas, which exaggerated its TV viewing prowess, resulting in a larger than typical drop in February 2022 TV viewing. Viewership was down 5.7% from January, well below the five-year average of 5%.

Despite this, February had its high spots, with the Super Bowl, “television’s annual tentpole event,” giving broadcast a leg up on streaming, with the largest weekly share of viewership (28.7%) since October 2021, according to Fuhrer.

While the Winter Olympics boosted sports viewership throughout the month, Fuhrer said the influence of Super Bowl LVI on week-by-week broadcast viewing in the sports events genre is clear.

The sports-heavy month boosted streaming, he said, with Peacock use reaching all-time highs as it broadcasted both the Super Bowl and the winter games. During Super Bowl week, Peacock usage soared, but continued to be strong during the Olympics. Streaming’s proportion of viewership outside of sports, on the other hand, has remained relatively constant month after month.

Toward the end of the month, Fuhrer said something unforeseen happened when Russia invaded Ukraine, giving rise to increased viewing of cable and television news. Week 4 saw a 54% spike in cable news viewership, giving cable news a quarter of all cable viewing, up from 16%-17%. Broadcast news, on the other hand, grew by 6.3% to 15.3% in the penultimate week of the month, putting it in second place after drama, he said.