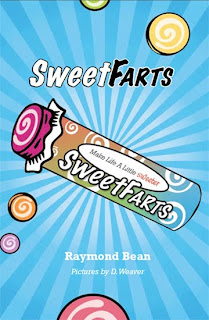 And the beat of self-published-to-book-deal success stories goes on. Author Raymond Bean never thought he’d have such success as a middle grade author. As a teacher, he was frustrated by the lack of books for boys and decided to create a book that he believed boys would read. The result? Sweet Farts and although some have criticized books like his as using the lowest common denominator to lure boys into reading, Bean believes books like these just might be the recipe booksellers and educators have been looking for.

In our in-depth interview with Bean today, he discusses his rise to success, how he bagged a top agent after years of rejections and his suggestions to other authors who want to follow in his path.

Tell me about your journey from being self-published to your contract with Amazon?

My journey (and it has been a journey) started with sending query letters and sample chapters out to many, many publishers and agents. Then, I waited for responses, sent out more queries, and collected my rejection letters. I started sending the idea for the first Sweet Farts book in 2006.

I continued to send the idea out for the next two years. I had a few near misses along the way with agents and publishers. In 2008 my wife read an article in a local paper about self-publishing. Self-publishing had been on my mind all along and after two years of rejection I decided to take the leap. I researched different companies and decided on Booksurge (now Createspace).

The finished book was published and available for purchase on November 11, 2008. The book sold only a few copies in November and December of 2008, and January 2009. In February 2009 the book started selling with Diary of a Wimpy Kid the Last Straw on Amazon.

That month Sweet Farts reached #4 on Amazon’s Hot New Releases in humorous children’s books. From there the book started to “pop up” with other titles in children’s literature on Amazon. I continued to send the idea and the completed book out to publishers and agents. I included sales numbers and Amazon rankings in hopes to make the case for the book’s appeal in the genre.

We continued to sell well through the spring and summer of 2009 and our Amazon visibility continued to increase. In August of that year we seemed to gain a positive word of mouth and we saw sales increase dramatically going into the fall. In September of 2009 I finally had an interested publisher. To my surprise, the interested publisher was in Korea. Eric Yang Agency in Korea gave me the news that TrueBooks Sinsago was interested in translating the book.

Interestingly, in October we had more interest, again from Asia. Pearson Education South Asia contacted me about including a portion of Sweet Farts in a text book called All About English Textbook for use in the Singapore market. They decided to use the cover and some interior text in a chapter about how to select a book.

During this time period the book was consistently in the Top 100 Children’s books on Amazon and Top 10 in Humorous Children’s Literature. In late October 2009 AmazonEncore contacted me about the book.

What is the story about for those who haven’t read it?

The first Sweet Farts book is about a Keith, a fourth grade boy who is wrongfully accused of stinking it up at school. He is given the nickname Silent But Deadly by the class bully. He tries to improve his situation by finding a cure for human gas for his school science fair project.

I’m a teacher and a parent so it was important to me for the series to be funny and appealing for young readers, but also include some science and history.

What did you do to get the word out there about your book and sell so well?

I paid for a “Buy x and get y” pairing on Amazon with Diary of a Wimpy Kid the Last Straw for the month of February 2009.

After that, I relied almost exclusively on word of mouth from generated by strong Amazon sales. I didn’t tell any friends, peers, or students about the book. I was getting a real clear picture of the book’s true appeal in the market.

How many copies did you sell before you were discovered by Amazon? What were you selling the books for?

I sold approximately 6,000 copies before AmazonEncore contacted me about the series. The book was selling for $9.99 on Amazon.

How did you land an agent?

The Korean interest helped me to make contact with Taryn Fagerness at the Taryn Fagerness Agency. She agreed to represent the first Sweet Farts book internationally. Taryn quickly sold Sweet Farts in Germany and Italy for translation. In May, I was contacted by Kelly Sonnack at the Andrea Brown Literary Agency. I am thrilled to have the advice and guidance of Kelly and Andrea Brown Agency as I move forward.

Ray, what inspired you to write the book?

I wrote Sweet Farts because I wanted to write a book that gave kids a good laugh. As a fourth grade teacher, I am always trying to help students learn to love books. For some students this is natural and they easily find books they love. More reluctant readers have difficulty finding books they want to read. My hope was to reach reluctant readers with a book that was funny and smart without being image heavy. I find that when young readers have fun reading a book they naturally want to read more.

I heard your students didn’t even know you were the author. Why’d you keep it a secret?

Prior to deciding to self-publish I had read many comments online about independent publishing. A common criticism I read was that most self-published authors never sell more than a few hundred copies and those copies are generally sold to family and friends. I decided to take that criticism out of the equation and find out what the book was capable of selling on its own. It was a great deal of fun watching the book grow in popularity and knowing it was not being driven by anything more than reader interest.

Do you think there are enough books for boys out there? If so, what books besides Diary of a Wimpy Kid would you recommend?

I think there are many great books for boys out there. For most boys who don’t love reading it’s not that there is a short supply of good books, just a matter of being in an environment where books they find interesting are read and talked about on a daily basis. The more books they are exposed to and the more they view books as interesting and fun, the greater the chances of them becoming readers.

I think there is always room for more books for boys and the wider the selection the better. Obviously titles such as Tales of a Fourth Grade Nothing, Charlie and the Chocolate Factory, and How to Eat Fried Worms are very popular with boys. I find some students may enjoy hearing a book or even reading a book in a group, but to get them to take out a book at home and read independently AND not view it as a chore, can be a challenge.

Obviously, for these readers, the Diary books are extremely popular, Big Nate is a very popular title, The Percy Jackson books, and The Sisters Grim.

Then there are the readers that are extraordinarily opposed to reading. For them reading is viewed as work that parents and teachers ask them to do. I find that these readers can be reached with many of the Andy Griffith’s books such as The Day My Butt Went Psycho, and the Just Series. Above all else, readers must be met where they are in terms of maturity and interest. If a book accomplishes these two things the book will most likely be read.

What are you working on next?

I’m very close to completing the third installment of the Sweet Farts series. I’m also working on several other ideas that Kelly is helping me develop. I’m really looking forward to seeing Sweet Farts: Rippin’ It Old School released on August 3. I hope it’s a book that young readers have fun with and that it gives them a few good laughs.