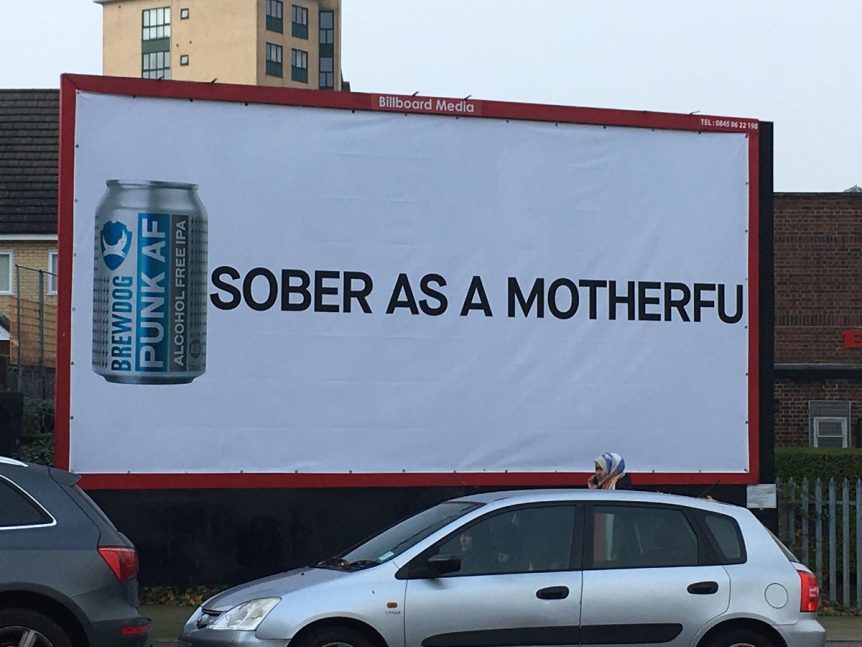 Brewdog, the Scottish craft beer maker, have built its brand around marketing with an attitude. The brand’s marketing efforts have included such off-the-walls stunts as dropping taxidermy cats from a London helicopter, earning a caution from the Advertising Standards Authority for foul language on its website, a beer encased in dead animals and trolling both Vladimir Putin and Donald Trump.

So the brand’s campaign for its Punk AF alcohol free IPA fits firmly in a tradition of pushing the boundaries of good taste. Twitter user @SydScarborough was taken aback by the location of its edgy billboard however: outside her daughter’s primary school.

Just arrived outside my daughter’s primary school. Just why pic.twitter.com/pNMKq2y1ET

Those on Twitter seemed split in their responses to the overall tone of the campaign (which, again, is very on-brand for Brewdog), with at least one respondent also seeming to defend its placement as no big deal.

Another pointed out that the memorable ad succeeded at getting a response out of viewers.

For this very reason. Advertising is made to get you talking about it/remembering it.

The campaign was created by Uncommon, the agency formed by ex-Grey London leaders Natalie Graeme, Lucy Jameson and Nils Leonard, which was also behind this ad for Brewdog that ran during U.K. broadcasts of Game of Thrones. Uncommon declined to comment. Brewdog has yet to respond to a request for comment.