The agency world experienced a controversy over the weekend ahead of the first events organized by Time’s Up Advertising, the group created back in March by a group of approximately 180 female executives.

To greatly oversimplify, the issue concerned access to these events—which are scheduled today at locations across the country—as well as the status of some of the women involved in the group.

We see you.
We see your talent.
We see the gap.

And together we’ll create change. See you May 14th. #TimesUpAdvertising pic.twitter.com/lugFKHYsqB

Many women who RSVP’d were told that they could not attend due to restrictions that limited attendance to those who currently have full-time jobs at agencies.

We’re told quite a few received variations on the following emails telling them that they did not qualify, with the subject line “RSVP DECLINED.”

“In reviewing your RSVP, we have found that you do not meet this criteria and have therefore been removed from the attendee list.

To create real, lasting change, we will need everyone involved, so please stay tuned for how you can get involved after May 14.”

Specifically, many women who are freelancers or who don’t currently work in agencies were struck from the list of attendees in various cities.

Diet Madison Avenue published a very large number of related messages on its Instagram page. According to those notes, some women who were fired in retaliation for reporting harassment or similar incidents were also excluded.

Part of this controversy, according to sources close to the group, stemmed from the challenges inherent in organizing large-scale events at locations around the country. But we have also received messages from those who take issue with the inclusion of certain women in the original group of 180, especially given the fact that hundreds of would-be attendees were left off the list.

One source describing itself as a group of women at a major holding company agency reached out earlier this month with a letter reportedly submitted to Time’s Up regarding a female executive who they describe as “a bully, a harasser, a perpetrator, and a fraud.”

A response from Time’s Up read:

“Thank you for reaching out and sharing your story with us. It takes profound courage and we know it’s not easy to do.

As we said in the TIME’S UP/ADVERTISING letter, as leaders, it’s on us to foster a workplace where people are challenged but still respected. All of the signatories of the letter are accountable to the values of the mission. We have drawn a line in the sand and hold the women who signed, and their agencies, accountable for a process of change.

The purpose of our May 14 events is to have an open discussion. To hear where we’re failing and to start building the steps to fix it. Please come to the meeting — we can’t make change without knowing where to begin. RSVPs will be available on our site soon.

We’re just getting started and clearly there’s a lot of work to do together.

Thank you again for reaching out.”

According to this group, the executive in question played a role in determining which RSVP’s in one city were declined.

She was also not the only one called out for allegedly positioning herself as a champion of women’s empowerment while simultaneously defending organizations and even individuals accused of facilitating or excusing past abusive behavior by both men and women.

The response grew so large that Time’s Up responded on Facebook, acknowledging that “we messed up” and calling the concerns from those who were uninvited “more than valid.” 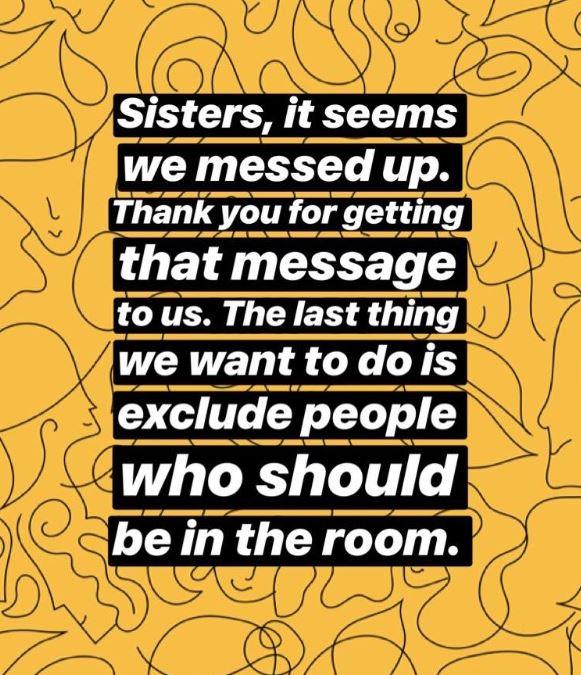 “We also didn’t stop to see that often those of you most hurt by this problem are, sadly, no longer in our agencies,” the post read in addressing the points made above. “These are the kinds of blind spots we are aiming to fix. We are sorry. We want you to know that you will not be turned away at the door.”

Part of the problem, according to the post, came from finding space for the thousands who voiced interest in attending. In New York alone, the Hammerstein Ballroom will accommodate some 2,200 attendees.

Clarifying that the group aimed to fill its initial events with women who could affect change at their organizations and exclude “press, anti-women’s groups and (for the first meeting) men,” the note said that Time’s Up doesn’t “expect you to trust us before we’ve even started.”

“On a final note, it’s worth saying this: We are awed by the commitment you are showing to this issue. Women turn up. That’s a gift in itself if we really want to make change. Thank you for showing up. We will learn and lead better. Together. See you tomorrow,” the post concluded.

Time’s Up Advertising is not offering any comments until the conclusion of today’s events, which are livestreaming on Facebook from 3:30-4:30 EST.