NEXT:Match Tells Singles to 'Lick Every Stranger They Can' This Summer
PREVIOUS:Revolving Door Roundup: AKQA, Doner, Real Chemistry and More

-Many people will be partaking in a beverage or two over the Memorial Day holiday. Intrinsic Wine Co. is hoping to catch some eyes for its new Sauvignon Blanc label and be part of the festivities. Working with a graffiti artist and agency partner Team One, the brand was inspired by how this new varietal is ‘born of the city’ – aged in a combination of oak, steel, and concrete.

The street art-inspired label was done by Noah Baker (Tuke), and the label gave him free reign to design something unique. He ended up spray painting a wall in Denver, and that art was then put on the new label. A video shows the graffiti process.

–Jeff Sweat, founder of Sweat + Co., and one of the truly good guys in the industry, wrote about his harrowing bout with Covid-19 and how the people in the ad community helped to save his life and keep him going.

–Ogilvy hired Kaleeta McDade as its first global creative lead for its experience practice as it moves toward integrating creative services globally.

-Infosys-owned experience agency Wongdoody is expanding into Europe, with new studios in London, Berlin and Amsterdam working with founding clients such as Telenet, Sainsbury’s, Daimler and BP.

-Award-winning chairman and co-founder of Finland’s Hasan & Partners, Ami Hasahn, described as “one of the great patrons of creativity,” has died after an extended illness.

-Adweek has learned that Milwaukee agency Hanson Dodge has given employees return to work plans, starting June 7. Employees will be allowed to work from home two days a week, and those returning to the office must be fully vaccinated. Those who cannot yet return to the office can remain remote workers and come into the office as needed. All employees can work one week a year from anywhere they choose.

-Can a thermometer really bring people back together? General Tools is hoping so. The company’s print ad will run as part of a USA Today special Memorial Day publication, and it touts the company’s Hawkeye Non-Contact Thermometer and how the device can help family and friends gather together safely for the holiday. It’s the first time General Tools has advertised during the Memorial Day holiday, and likely the first time a thermometer has been marketed as a way to be with family and friends. The ad was created by Boudreau Advertising. 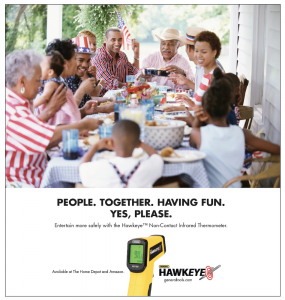 The Hawkeye thermometer can bring people together for the holiday.

–Bennett D. Bennett talked with Ad Age about 600 & Rising, what’s next for the organization, and the state of Black talent in the advertising industry.

-Since Memorial Day is one of the biggest grilling days of the year, here’s some grill news. Grill brand Traeger used live animals in a stunt to emphasize using all-natural, farm fresh ingredients. In the OOH campaign from Zambezi, “Farm to Traeger,” Traeger installed a billboard in Salt Lake City off I-80 that integrated a pen full of live animals below the billboard to make a “grillboard” of organic ingredients. 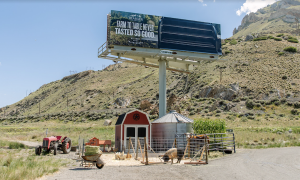