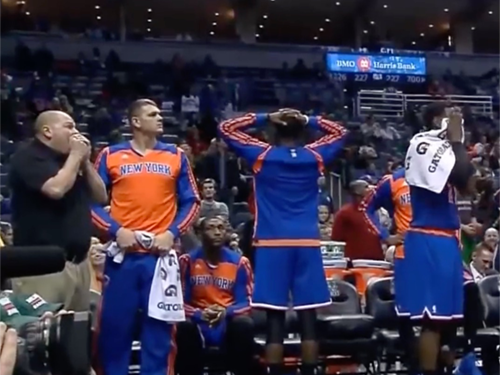 The New York Knicks are one of the most valuable sports franchises in the world. According to Forbes’ annual list, the Knicks are worth $4 billion, making them the fifth most valuable franchise in the world. No. 1 is the Dallas Cowboys, No. 2 the New York Yankees, and so on down the list. But the Knicks are different from every other team in the top ten for one reason—they aren’t very good (though one could argue that the Cowboys are in an era of “meh,” too).

The Knicks haven’t finished with a winning record since the 2012-13 season and have only moved past the first round of the playoffs twice since 2000. Sharing the top ten list with dynasties like the New England Patriots, Golden State Warriors and Barcelona, the Knicks stand as an outlier. Still, despite years where mediocrity would be a welcome change, Knick fans remain faithful to the team in Madison Square Garden—but they can only take so much.

With the crosstown Brooklyn Nets set to bring superstar Kevin Durant back from injury next season, the Knicks are tapping Steve Stoute and his creative agency Translation to help remind people why they became Knicks fans in the first place.

“Our goal is to not only build a Knicks team that is successful on the court for the long-term—we also want to continue forging a deeper connection between our incredibly loyal fans and our team,” said Andy Lustgarten president of The Madison Square Garden Company. “We look forward to working with Translation to create powerful marketing and advertising platforms that excite the Knicks community and bring us together.”

Translation’s previous work has included State Farm’s “Cliff Paul” ads and Budweiser’s “Made in America” campaign. The agency also worked with the Brooklyn Nets, helping the team transform its brand from the overlooked New Jersey Nets into the Jay-Z supported Brooklyn franchise. Now the Knicks are hoping to bring that same energy back to their fans.

“Madison Square Garden and the Knicks are two of the most iconic and storied brands, and they resonate well beyond sports,” said Stoute, founder and CEO of Translation. “It’s an honor to partner with these brands, and together we will be able to showcase their rich history, legendary personalities and iconic moments. We are going to bring new, creative ideas and produce content that encapsulates Madison Square Garden and the Knicks, building upon their vast reputations to further connect with fans.”

Stoute is a self-proclaimed Knicks fan—as most New York basketball fans of his generation are. But the Knicks also used to be good (and the Nets were in New Jersey). Patrick Ewing led a talented team in the 1990s that had a heated rivalry with Reggie Miller’s Indiana Pacers. For fans under 25, those days are only accessible through ESPN 30 for 30’s and Bodega stories. Besides a few years of Carmelo Anthony and the shooting star that was Linsanity, younger Knick fans have hardly had reason to cheer.

With the Brooklyn Nets bringing in a massive influx of cash from owner Joseph Tsai of Alibaba, two engaging superstars in Kyrie Irving and Durant, and a new image partially thanks to Translation, the Knicks are in danger of losing the casual New York basketball fan. Madison Square Garden executives are hoping Translation can call upon the team’s history to keep fans focused on the original New York franchise. But either way, Stoute’s agency will be on the winning side.