NEXT:Monday Morning Stir
PREVIOUS:W+K London and Deliveroo Free You to Order the Same Boring Dumplings Every Night for the Rest of Your Life

The “dropping someone in a strange place to see how they fare” tactic has been done before and can come across as predictable. One unique campaign last summer, however, found people plopped into Seattle without technology to see how they could navigate the city’s scene. The results proved that, with the right execution, that approach can be interesting and fun.

Such is that case for some branded content for Visa out of Australia featuring The Daily Show and Crazy Rich Asians star Ronny Chieng. The premise of Urban Survivalist is creative comfort food: a celebrity gets dropped into an unfamiliar place with no wallet—and we’ll see how they survive.

A couple of problems with that, though … Chieng is in Sydney and has only been driven about 10 minutes after being “kidnapped,” and the hapless crew forgets to take his phone away. As a result, Chieng can survive the challenge and buy things with his mobile and Visa just fine, thank you very much.

The three-episode project, created via a Trans-Tasman partnership between Colenso BBDO and Clemenger BBDO, is being touted as “the most successful failure in branded entertainment history,” according to Levi Slavin, CCO at Colenso BBDO.

“We asked ourselves if Ronny Chieng can survive for 24 hours in the urban jungle with nothing but his wits, a camera crew, a support team and Visa on his phone? Well, yes. And he did,” he added.

While the series might not elicit massive belly laughs, it doesn’t need to due to many clever, quick-witted moments as Chieng does everything he can to get away from the frustrated producers. The constant voiceover from one of the producers, to create tension for the series, is another high point.

According to Jac Phillips, Visa head of marketing for Australia, New Zealand and the South Pacific, Chieng worked closely with the brand and agency to “put humor at the heart of our approach.”

“The purpose of this campaign is to build awareness about the convenience, acceptance and security of Visa mobile payments,” added Phillips. “By entertaining our audience at the same time as educating them on the benefits of paying with Visa on your mobile phone, we believe we’ll get the cut through we need.”

There is no word on if whether there will be more. However, we can only hope so, as the puzzling cliffhanger involving a blow-up flamingo and a water taxi demands some level of closure.

Urban Survivalist can be seen in cinemas, TV and online at Visa’s site in Australia. 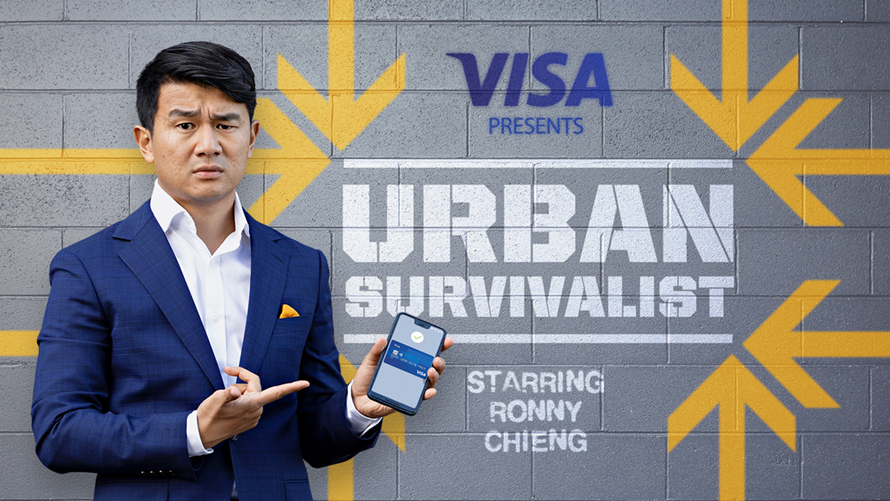