TBWA\Chiat\Day New York announced today that it poached creative duo Amy Ferguson and Julia Neumann from MullenLowe New York. The two will come aboard as executive creative directors on March 1. 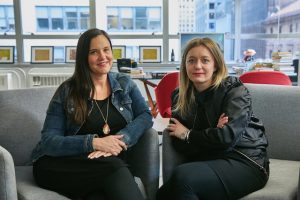 Ferguson and Neumann were the first hires at MullenLowe New York, which brought them on in 2015 to oversee the JetBlue account. The pair have since produced JetBlue’s viral Mother’s Day film,  “FlyBabies,” which won at Cannes Lions, The One Show, the Clio Awards and the Effies, among others.

“We’re at a pivotal point in our creative trajectory with opportunities that we can absolutely turn into great work, and we need leaders like Amy and Julia to push the work and level of craft to make the very most of them,” said Chris Beresford-Hill, TBWA\Chiat\Day New York chief creative officer. Ferguson and Neumann will report directly to him.

Neumann started her career at Saatchi & Saatchi New York, where she won the agency’s first Cannes Lion for P&G’s Tide years before people asked whether this is a Tide ad. She also spent stints at Young & Rubicam New York, Wieden + Kennedy Portland and BBH New York.

Ferguson got her start as an intern at TBWA\Chiat\Day, leading her to then take on her first full-time role as art director at the agency. She then moved to Grey New York and worked as a freelance creative director for several years before joining MullenLowe.

Outside the agency world, Neumann recently wrote and directed “Deporting Myself,” a short documentary about immigration, and Ferguson has produced her own line of greetings cards.