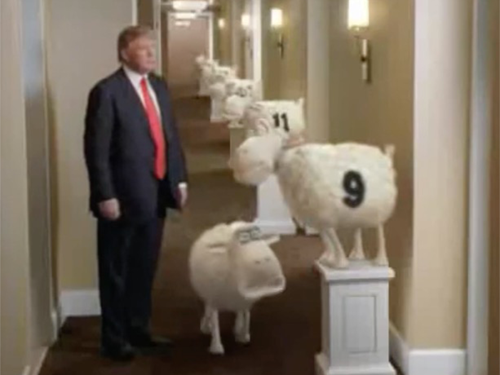 Oh, there were plenty of revelations in The New York Times’ deep, investigative masterpiece of journalism (calling Mr. Pulitzer) into Donald Trump‘s taxes. Nothing was that shocking, honestly. But there was one little thing in a follow-up from the (excellent) anchor piece that dropped Sunday: Trump did quite a few ads.

Without going into great detail, let’s just say that this canon didn’t land any hardware on the Croisette.

Let’s start with Serta, which, according to the Times, netted Trump $15 million. This 2010 “gem”—with Trump and the brand’s numbered sheep—has an unintentionally hilarious line at the end. According to a glowing review in Furniture Today at the time, the ad “can be seen on www.serta.com and on Serta’s YouTube channel starting Aug. 31.”

Bonus: Sweet, sweet numerology conspiracy theory in the comments. Nice to see YouTube cracking down on that nonsense.

Unilever got sucked into Trumpworld with a reported $850,000 to pawn All laundry detergent. There’s no video of this one, but here’s a nifty photo of the bloviator-in-chief holding a basket of (presumably) clean clothes.

In 2002, Trump starred with someone slightly more capable than most of his cabinet (pictured at the beginning of this post, a bunch of sheep)—the lovably rotund Grimace—to tout the $1 Big ‘n Tasty from McDonald’s. It’s unclear how much Trump trousered from this one, but we’d mark it somewhere in the $750 range if the acting matched the compensation.

Domino’s in 2005, the Times says, netted Trump $500,000. Capitalizing on The Apprentice’s ascendency, a delivery guy brings Trump three pizzas for $5 each. That’s it. There’s a quip, a knowing look to the camera and, boom, we’re done.

An eagle-eyed commenter noted that Trump didn’t pay the delivery guy in the ad, further confirming that vendors of all stripes end up getting stiffed by the president.

Then there is the $500,000 the Times says Trump received for selling Oreos. The fuck IS this? The Manning Brothers (who are in one of history’s greatest ads, don’t @ us) and Darrell Hammond impersonating Trump. Perhaps it’s proof that cocaine can lead to all kinds of “creative” ideas.

It’s also perhaps ironic that, while running for president, Trump boycotted the brand over taking some manufacturing out of Chicago. Loyal guy.

Of course, there are other brands that Trump has shilled for over the years, like Pizza Hut (with ex-wife Ivana Trump) and Diet Pepsi.

But admit it, you were hoping that we’d drop Trump Steaks in this snarky little roundup. There you go. You’re welcome. And don’t forget to vote.