Remember Ray Liotta? We know the dude is working, but to us and millions of others he will always be Henry Hill. He hasn’t really had a second act a la Lorraine Bracco as Doctor Melfi.

KFC, on the other hand, has used so many C-list and below actors in its ongoing W+K campaign that they are really starting to blur together. If we had to use one word to describe the effect it might be schizophrenic.

That’s certainly true of the new ad, in which the Colonel compares two new styles of chicken, one hot and one sweet.

Here’s the two-sided art to further emphasize the point. 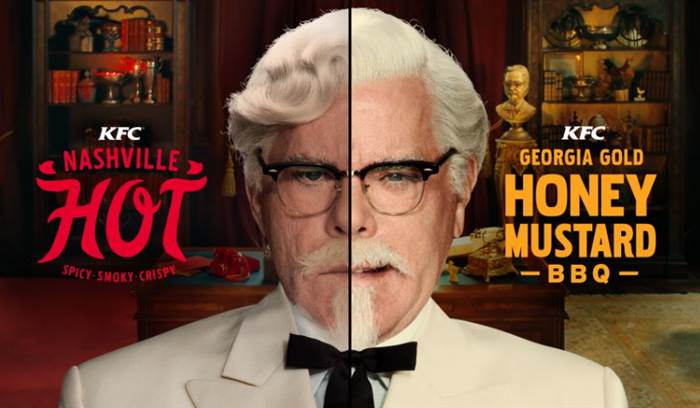 We do love hearing more actors try to fake a Southern accent. Kevin Spacey is terrible at it, and somehow no one gives him any shit. Now which sort-of-working stiff will be the next Colonel? We vote for Rob Schneider, complete with his anti-vaxxer conspiracy theories and pity roles in straight-to-Netflix Adam Sandler movies.

However one may feel about these ads, they appear to be working. Sales at each store increased 3% in the recent quarter, thank you Business Insider.

On a side note, we love how all the comments on paid “trending” videos are always some variation on “why is this trending?” It’s not that hard to figure out!

Also, even Ray Liotta still thinks of himself as “that guy from Goodfellas.”